An X-ray view of carbon 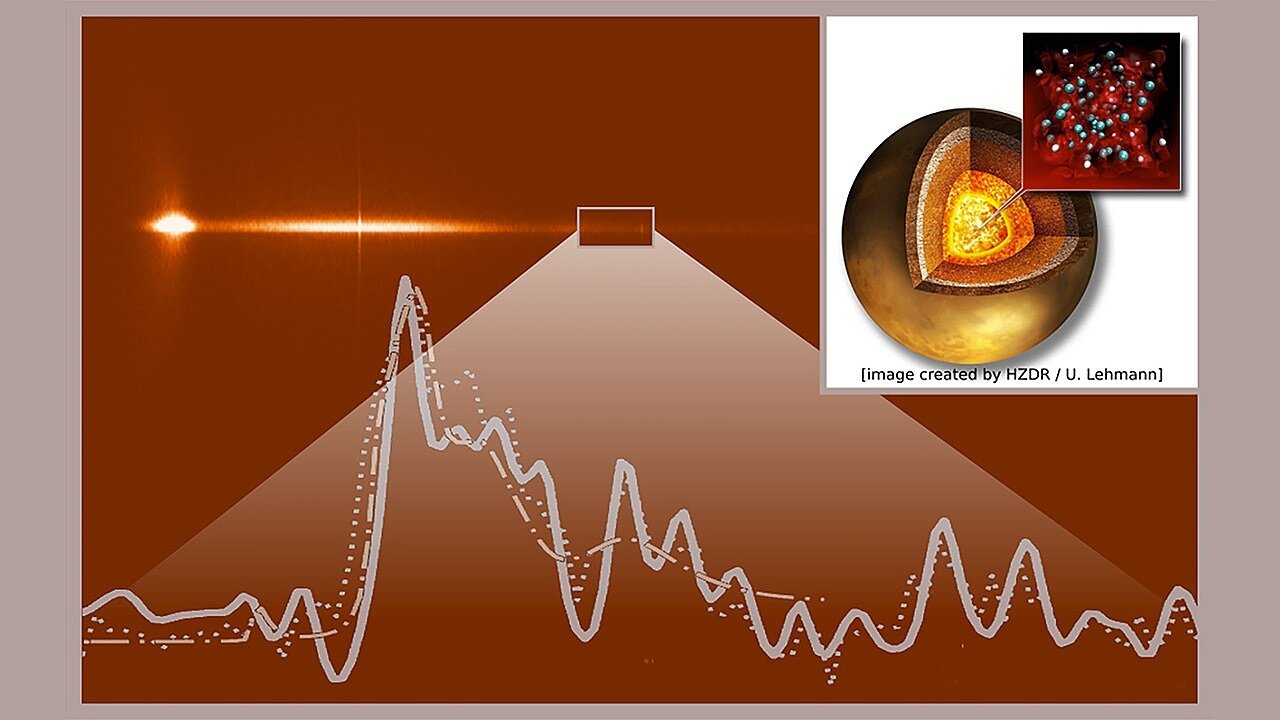 At the heart of planets, extreme states are to be found: temperatures of thousands of degrees, pressures a million times greater than atmospheric pressure. They can therefore only be explored directly to a limited extent—which is why the expert community is trying to use sophisticated experiments to recreate equivalent extreme conditions. An international research team including the Helmholtz-Zentrum Dresden-Rossendorf (HZDR) has adapted an established measurement method to these extreme conditions and tested it successfully: Using the light flashes of the world’s strongest X-ray laser the team managed to take a closer look at the important element, carbon, along with its chemical properties. As reported in the journal Physics of Plasmas , the method now has the potential to deliver new insights into the interior of planets both within and outside of our solar system.

The heat is unimaginable, the pressure huge: The conditions in the interior of Jupiter or Saturn ensure that the matter found there exhibits an unusual state: It is as dense as a metal but, at the same time, electrically charged like a plasma. “We refer to this state as warm dense matter,” explains Dominik Kraus, physicist at HZDR and professor at the University of Rostock. “It is a transitional state between solid state and plasma that is found in the interior of planets, although it can occur briefly on Earth, too, for example during meteor impacts.” Examining this state of matter in any detail in the lab is a complicated process involving, for example, firing strong laser flashes at a sample, and, for the blink of an eye, heating and condensing it.

But what are the chemical properties of this warm dense matter really like? Up to now, existing methods have only produced unsatisfactory answers to this question. So, a team from six countries came up with something new, based on the strongest X-ray laser in the world, the European XFEL in Hamburg. In an accelerator a kilometer long, extremely short, intensive X-ray pulses are generated. “We directed the pulses at thin carbon foils,” says lead author Katja Voigt from HZDR’s Institute of Radiation Physics. “They were made of graphite or diamonds.” In the foils, a small proportion of the X-ray flashes is scattered on electrons and their immediate environment. The crucial thing is that the scattered flashes can reveal what kind of chemical bond the carbon atoms have formed with their environment.

After the doubts came the surpriseKnown as X-ray Raman scattering, researchers in fields like materials science have been using this method for quite a while. But for the first time, the team around Voigt and Kraus have managed to equip it for experiments to probe warm dense matter. “Some experts were doubtful whether it could work,” Kraus explains. The detectors, in particular, which have to capture the X-ray signals emitted by the carbon foils, have to be both highly efficient and high-resolution—a major technical challenge. But the analysis of the measurement data clearly showed which bonding states the carbon had entered. “We were a bit surprised that it worked so well,” says Voigt, obviously pleased. If they were to apply the method to warm dense matter, however, something was still missing—strong laser flashes that would drive the carbon foils to high pressures and temperatures of up to several 100,000 degrees. For this purpose, the Helmholtz International Beamline for Extreme Fields (HIBEF) which was recently inaugurated under the auspices of HZDR at the European XFEL comes into play. It is one of the most modern research facilities in the world with high-performance lasers that could perform the first X-ray Raman experiments in a few months’ time. “I’m really optimistic that it’ll work,” says Dominik Kraus.

Comet crash in the labThe method could well facilitate many different scientific insights: for one thing, it is unclear how many light elements like carbon or silicon are present in the Earth’s core. Laboratory experiments could produce important indicators. “The new method is not restricted to carbon, but could be applied to other light elements,” Katja Voigt explains. Another question to be explored addresses the interior of so-called gas giants like Jupiter and ice giants like Neptune. Here, complex chemical reactions will be occurring—as they will in distant exoplanets of similar stature. It should be feasible to re-enact these processes in the lab using the X-ray Raman method. “Perhaps it might be possible to solve the puzzle about which reactions are responsible for planets like Neptune and Saturn emitting more energy than they really should,” Kraus hopes.

In addition, this new method should enable scientists to simulate comet crashes on a miniature scale: If comets really did transport organic matter to Earth once up a time—could the crash have triggered chemical reactions that favored the development of life? And the method even holds potential for technical applications: On principle, it seems possible that, under extreme conditions, novel materials could form which could exhibit fascinating properties. One example would be a superconductor that functions at room temperature and does not need complicated cooling like existing materials. A room-temperature superconductor of this kind would be of great technological interest as it could conduct electricity completely loss-free without having to cool it with liquid nitrogen or liquid helium.