Bizarre, scorching exoplanet WASP-76 b may be even hotter than we thought 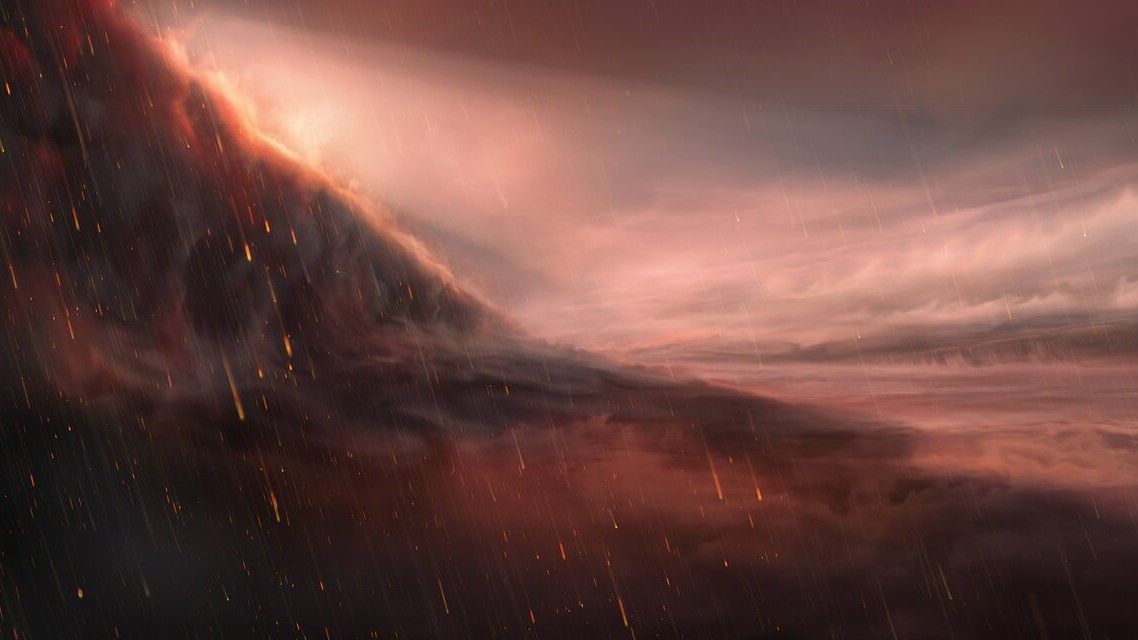 The exoplanet WASP-76 b may be hotter than scientists had thought — and that’s really saying something.

WASP-76 b, which lies about 640 light-years from the sun, is an “ultrahot Jupiter” that zips around its parent star once every 1.8 Earth days. This extreme proximity to the star has molded the gas giant into a bizarre hell world with no analog in our own solar system.

For example, the huge amounts of stellar radiation that WASP-76 b absorbs have puffed the exoplanet up immensely; it’s 1.85 times wider than Jupiter despite possessing just 85% of that planet’s mass. WASP-76 b is also tidally locked, always showing the same face to its star just as the moon only ever shows its near side to us here on Earth.

And WASP-76 b is incredibly hot. Astronomers estimate that its nightside is 2,370 degrees Fahrenheit (1,300 degrees Celsius), while temperatures on its dayside hover around a ridiculous 4,350 F (2,400 C) — hot enough to vaporize many metals. Indeed, scientists think that strong winds carry vaporized iron from the exoplanet’s dayside to the cooler nightside, where it condenses and falls as molten iron rain.

But WASP-76 b is probably even more extreme than previous studies suggest, new research reports. A team of scientists observed the exoplanet using the Gemini North telescope, near the summit of Hawaii’s Mauna Kea volcano, and spotted the signature of ionized calcium — an electrically charged version of the element — in its upper atmosphere.

“This spectral signature of ionized calcium could indicate that the exoplanet has very strong upper-atmosphere winds,” she said. “Or the atmospheric temperature on the exoplanet is much higher than we thought.”

Deibert is lead author of a study reporting the new WASP-76 b results, which was published online today (Oct. 5) in the Astrophysical Journal Letters. You can read a preprint of it for free at arXiv.org. The researchers also presented their results today at the 53rd Meeting of the American Astronomical Society’s Division for Planetary Sciences.

The new study — which doesn’t speculate about how much higher WASP-76 b’s temperatures may be — further reinforces that our Milky Way galaxy is an incredibly diverse place, peppered with a wide variety of exotic planets. Over the past decade or so, astronomers have started to appreciate this planetary panoply, though many more surprises are doubtless in store as we look deeper, and more sharply, into space.

“As we do remote sensing of dozens of exoplanets, spanning a range of masses and temperatures, we will develop a more complete picture of the true diversity of alien worlds — from those hot enough to harbor iron rain to others with more moderate climates, from those heftier than Jupiter to others not much bigger than the Earth,” study co-author Ray Jayawardhana, an astronomy professor at Cornell University in Ithaca, New York, said in the same statement.

“It’s remarkable that with today’s telescopes and instruments, we can already learn so much about the atmospheres — their constituents, physical properties, presence of clouds and even large-scale wind patterns — of planets that are orbiting stars hundreds of light-years away,” Jayawardhana said.