‘Chestbursters’ and the dark calling of the lunar underground — Commander’s report: lunar day 14 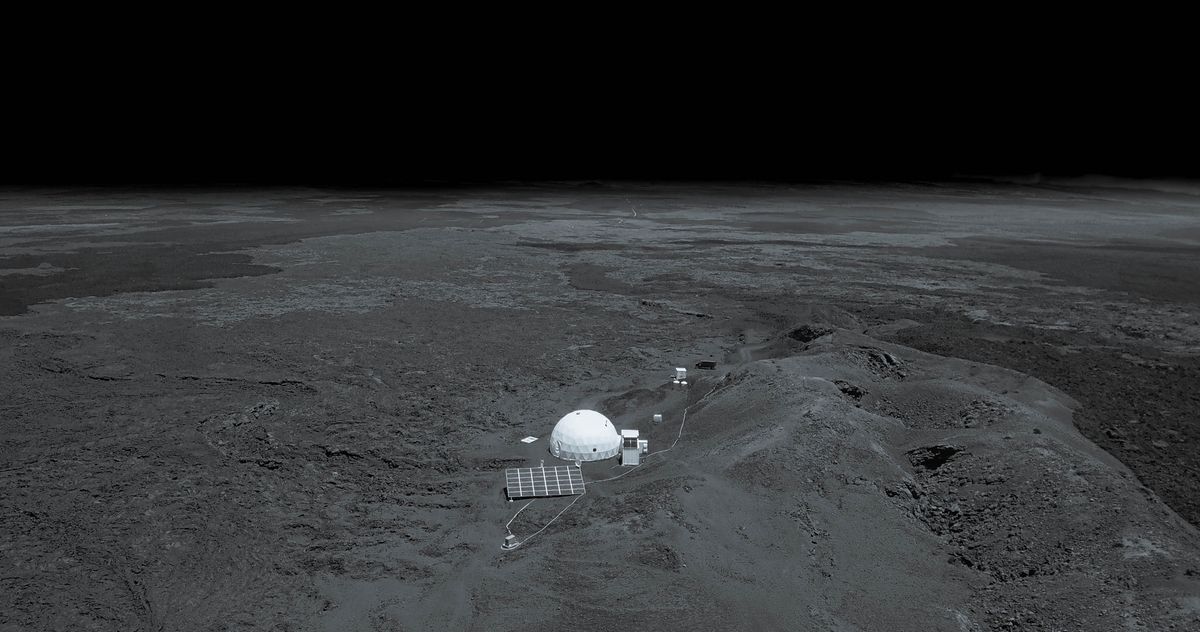 Dr. Michaela Musilova is the director of Hawaii Space Exploration Analog and Simulation (HI-SEAS) program, which conducts analog missions to the moon and Mars for scientific research at a habitat on the volcano Mauna Loa. She commanded the two-week Selene V lunar mission and contributed this report to Space.com’s Expert Voices: Op-Ed & Insights.

Our luck ran out. I was thinking this a couple of days ago, when I was alone and underground in one of the scariest lava caves that I have ever been in. We were so fortunate with good weather up until that point that I was expecting something bad to happen at any moment. A sort of return to the “yin” from the “yang”, from the proverbial alternating dark and light cycles in the “yin and yang” Chinese philosophy. Wouldn’t the best return to misfortune and problems be right here, tens of feet underground?

These thoughts were starting to make me feel nervous. I looked around to my left and right. Pitch-black tunnels surrounded me in both directions. A chilly breeze was passing from one tunnel to another. As much as my instinct was telling me to get out of there as quickly as possible, I started to sense something like a calling beckoning me into the darkness. Temptation was slowly getting to me. It had been a while since I had explored the labyrinth of tunnels heading towards the center of the volcano Mons Hadley (aka Mauna Loa in Hawaii, where the HI-SEAS research station is located). Maybe it was time to return to that subsurface maze?

Suddenly, the visor of my analog spacesuit helmet started fogging up. I noticed that my heart rate was speeding up and the heavier breathing made it more difficult for me to see beyond my helmet. What perfect timing for something to potentially jump out at me from one of the tunnels. My crewmembers were already on the surface. As the commander, I stayed back to be the last member of our expedition to climb up to the surface into the simulated lunar terrain. I had been hiding away behind stalactites of lava to avoid rocks falling down from underneath my crewmembers’ feet, while crouched down and on my knees. The ascent is almost vertical, so we have to climb up one at a time, with a few minutes in between each person’s turn.

Panicking is never a good thing in my experience, so I took deep breaths and focused on slowing down my heart rate. Soon enough, I could see through my visor again. I then looked at my wrist computer and saw that it was time for me to start the climb to the surface. The calling from the darkness tempted me one last time, but I resisted. Instead, I climbed out of the so-called Sarlacc Pit lava tube skylight, which is an entrance into the underground lava cave system. My crewmembers were waiting for me outside enjoying views of the sunlight volcano, while I was already planning my return to explore the dark worlds below us.

Little did I know that my mini lava tube adventure would follow me back to the HI-SEAS habitat. That evening we finished filming a crew video for our HI-SEAS “Easter egg.” It is a tradition that I have been encouraging crews to take part in over the past few years. Each crew leaves something behind for the next crews to find. It can be anything from advice for surviving on mission and recipes using our freeze-dried food, all the way to videos and songs representing each crew. Selene V decided to make several additions to the Easter egg. One of them was a fun, multi-cultural dance performance and another was a video involving so-called chestbursters from the movie “Alien.” These aliens attacked us after we ventured into a lava cave nearby. Let’s just say that I was happy that we filmed the chestbursters scene after my experience kneeling in the dark, alone and in a similar cave.

It seems that Crew Biologist Dr. Brandy Nunez is also tempted to join me in exploring those underground systems, regardless of the chestbursters. She is equally fascinated by them as I am. During the Selene V mission, Brandy completed scans of lava tubes using non-invasive methods to detect life. She also finished making different types of cave acoustic recordings. Brandy was also able to confirm observations from previous crews that different types of seeds can grow very efficiently using human hair as fertilizer. Corn seeds had noticeably more growth using our hair fertilizer, compared to seeds that were grown using recycled teabags and the control group that was only provided with water. The remaining microgreens that she grew will be harvested tonight to enjoy on our last night on the moon.

Some of the experiments in our habitat’s laboratory didn’t yield as much growth as Crew Engineer Sean Gellenbeck hoped for. His research focused on examining the gas exchange between mushroom and algal cultures in a closed system for space mission applications. The algal culture did not grow as he expected, which has provided him with a number of ideas for how to improve the experiment in the future. Sean has already come up with several iterations from his project at HI-SEAS that he is planning on doing to his measurements and control systems, as part of his PhD research.

The handful of good weather days we had meant that Space Resources Officer Gustavo Jamanca-Lino was able to collect all of the geological samples that he needed for this research during our moonwalks. His first results indicate that the basaltic lava around HI-SEAS has a similar hardness to the lunar regolith’s first three meters in depth. Gustavo will continue his research pafter HI-SEAS by performing tests in mineralogical and metallurgical laboratories. His goal is to measure the power required to crush lunar rocks for mining, civil construction and other in situ resource utilization activities for future astronauts on the moon.

At the habitat, Science Communications Officer Bader Al Moulah completed three simulated surgical procedures based on instructions from doctors on “Earth”. He performed them on crew volunteer Sean and documented the procedures during our simulated lunar mission. They will be reviewed by medical doctors upon his return to his home country of Kuwait. The next step for Bader’s project will be do develop an astronaut medical readiness curriculum and he will write a research paper to submit for publishing.

Crew Operations Officer Dr. Lindsey Kishline also finalized piloting her experiment on Officer Al Moulah. She was able to complete the experimental framework for her study of augmented reality in analog spacesuit helmets. Lindsey plans to continue this research after the mission, with a focus on finding ways to improve communications between crewmembers and access to important information during expeditions in spacesuits. For instance, this includes reducing the cognitive load and reaction times for crewmembers when provided with critical information.

Commander Musilova signing off at the end of a long series of nearly back-to-back missions. After Selene V, I will finally have a little break to spend some time on Earth. Just like in the lava cave, I am torn between a number of emotions. I don’t want this mission to end, as I had a great time with this wonderful crew. I will miss them very much and my heart is already breaking at the thought of saying goodbye to yet another space family. On the other hand, I will finally be able to go home tomorrow, talk to my loved ones, sleep in my own bed and eat fresh food. I will be able to enjoy that for more than just a couple of days, which suddenly makes me almost uneasy. Will I be able to adapt back to Earth life after spending so many months on the moon and Mars?