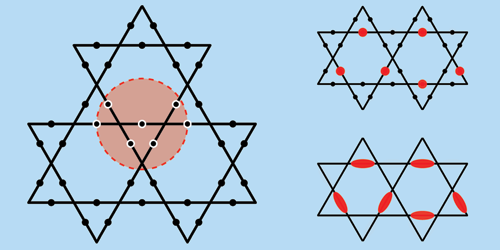 A lattice of highly excited atoms can exhibit a topological phase, a new theoretical study shows.

To distinguish a loop of yarn from a single, tangled strand, you have to follow its entire length until you either find an end or arrive back at the beginning. In a similar way, some materials can adopt configurations that cannot be identified from local measurements; they must be examined as a whole. Theorists predict a myriad of applications for these “topologically ordered states,” as topological order has been linked to superconductivity and offers desirable properties for quantum computing. Now, Ruben Verresen of Harvard University and colleagues demonstrate theoretically that such a topological phase can be exhibited by cold atoms on an engineered lattice [1]. Realizing their proposal experimentally would constitute a rare observation of topological phases in a material.

The researchers propose to create a phase with so-called

topological order in a 2D array of cold atoms. Each atom would form a vertex in a “ruby” lattice consisting of triangles, rectangles, and hexagons. The team would excite some of the atoms into an extremely high quantum state known as a Rydberg state. Adjacent atoms cannot be excited into this state simultaneously, as one Rydberg atom shifts its neighbor’s energy structure such that the excitation laser becomes off-resonant. This constraint would force the system into an alternating pattern of Rydberg and ground-state atoms whose interactions mathematically resemble theories of topological materials proposed in the 1970s. These topological states could be detected by taking global measurements of the system, such as detecting the fraction of excited atoms along arbitrarily chosen strings of atoms. The researchers and their collaborators have begun to build this system, and early experiments have already exhibited some of the signatures predicted by their theory.

Sophia Chen is a freelance science writer based in Columbus, Ohio.

Matter-wave diffraction can put chiral molecules into superpositions of left- and right-handed forms, enabling new studies of how the two states interact with their environment. Read More »