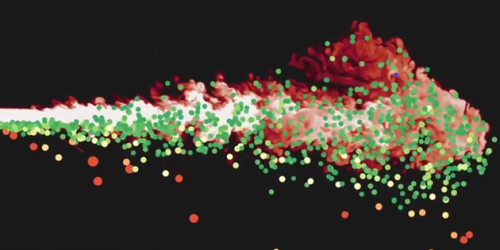 In cool, humid air, droplets emitted by a cough first grow then shrink, according to simulations.

The COVID-19 pandemic has focused attention on the respiratory droplets produced by breathing, coughing, and singing. Numerical simulations of a cough now show [1] that in cooler, more humid air, these droplets first grow before evaporating and shrinking—they don’t continuously evaporate, as previous research has suggested. The growth occurs when warm, humid breath interacts with colder air, producing a plume of water-vapor-saturated air—an effect that leads to the familiar “frosty” breath on cold days. The enlargement of cough droplets inside this plume causes them to survive longer than they do at higher temperatures, potentially allowing an infected person to spread an airborne disease to people located farther away.

In recent simulations [2], Detlef Lohse of the University of Twente in the Netherlands and his colleagues showed that the humid, turbulent jet of breath in a cough allows the smallest droplets (around 10 micrometers in diameter) to survive up to 150 times longer than they would in isolation. These results agreed with previous evidence that, indoors, the ubiquitous “6 foot rule” is not adequate to avoid contact with the smallest droplets expelled by an unmasked person (see How Talking Spreads Viruses).

) but continuously decreases if it’s

. The growth in the

simulations is caused by condensation in a plume of air with local humidity above 100%; at

, the air around the droplets is less humid. The team also developed a mathematical model that accurately predicts the local humidity changes and that could be used to predict the behavior of droplets.

David Ehrenstein is a Senior Editor for Physics.