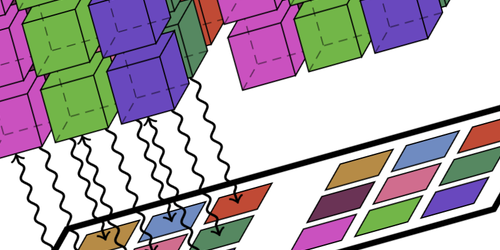 Incorporating storage units for quantum information into quantum computers may allow researchers to build such devices with several orders of magnitude fewer qubits in their processors.

So far, research on quantum memory—units for storing quantum information—has largely focused on its use in quantum communications and networks. Now, Élie Gouzien and Nicolas Sangouard of the French Alternative Energies and Atomic Energy Commission have investigated how quantum memory might be used in computations. The duo shows that a quantum computer architecture that incorporates a quantum memory could perform calculations with 3 orders of magnitude fewer qubits in its processor than standard architectures require, making the devices potentially easier to realize [1].

Researchers consider superconducting qubits one of the most promising technologies for building a quantum computer. But a challenge of using such qubits is that a large number are required for the standard superconducting-qubit-computer architecture, whose processor typically consists of a 2D grid of qubits in which computations are done using interactions of neighboring qubits.

In their work, Gouzien and Sangouard instead considered a 2D grid of qubits connected to a quantum memory that is organized in 3D. To compare this architecture to the standard one, they analyzed how it should perform the task of finding the prime factors for very large integers called RSA integers. They found that this quantum computer design with a quantum memory could factor a 2048-bit RSA integer with just 13,436 qubits, while the standard architecture, with no quantum memory, might require some twenty million qubits for this task.

The standard architecture is estimated to take just 8 hours for the factorization, whereas the quantum memory architecture would require 177 days. But Gouzien and Sangouard say that the approach is worth further investigation, as the substantially smaller number of qubits required makes the approach much more feasible in the near-term.

Erika K. Carlson is a Corresponding Editor for Physics based in New York City.