Filming ‘Among the Stars’ with Disney Plus meant a 2-year journey for astronaut Chris Cassidy. Here’s what he learned. 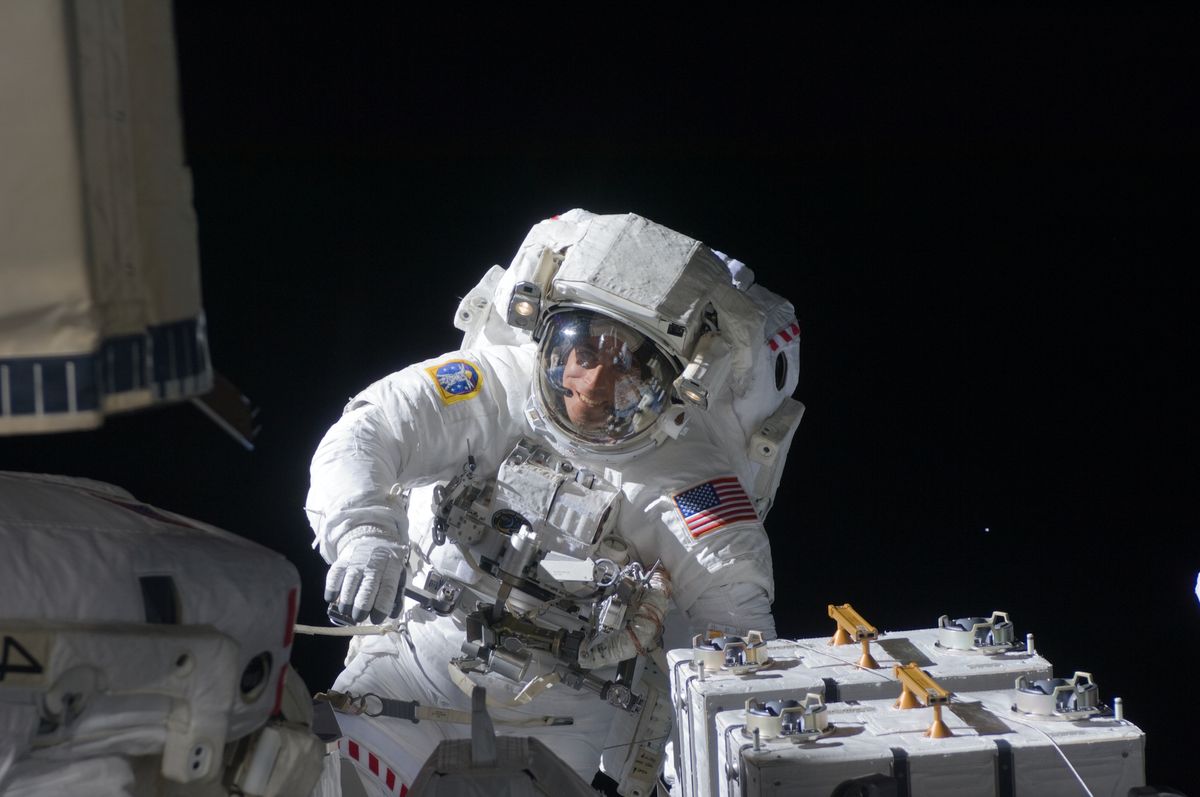 Space fans are in for a special fall treat this month with an emotional, all-access peek at the adventurous world of NASA astronauts when Disney Plus rolls out “Among the Stars” on Wednesday (Oct. 6). This riveting new six-part docuseries invites viewers to an intimate glimpse behind the scenes of the U.S. space agency and its many international partners.

Directed by Ben Turner and produced by Fulwell 73, “Among the Stars” follows retired NASA astronaut Chris Cassidy on his third and last space mission using rare footage, personal video logs, and livestream tapes, all while the planet enters lockdown during the onset of the global pandemic. The series launches on Disney Plus just in time for World Space Week, which began Monday.

Cassidy, one of only three Navy SEALs ever to become astronauts, is the focus of this intense two-year look at a critical mission to the International Space Station to conduct repairs on a sophisticated piece of equipment called an Alpha Magnetic Spectrometer (AMS).

Related: Soar into space with this trailer for ‘Among the Stars’ on Disney Plus

“The show does a great job of demonstrating the hard work of engineers and planners and making the equipment for the repairs,” Cassidy told Space.com. “Then it ultimately comes to some human being, the astronaut, who can make mistakes, to put in this new repair and conduct the mission at hand.”

Nobel Prize-winning physicist Samuel Ting also looms over the complex NASA proceedings in Disney’s new space documentary while preparations are made to fix the $2 billion device under the most hazardous conditions in a series of long spacewalks.

Ting is a Chinese-American scientist who, with Burton Richter, was awarded the Nobel Prize in 1976 for discovering the subatomic J/ψ particle. He’s been the principal investigator in groundbreaking research conducted with the AMS, which was installed on the International Space Station back in 2011.

This pioneering AMS experiment collects elusive charged cosmic rays that might provide essential clues as to the origins of the universe. As the series progresses we’ll see Cassidy’s fellow astronauts and cosmonauts in the midst of training and planning for their upcoming rocket trip as they navigate a number of unforeseen obstacles along the way.

“Among the Stars” was filmed in collaboration with numerous space agencies, including NASA’s Johnson Space Center in Houston, the European Space Agency in Cologne, Germany, the Japanese Aerospace Exploration Agency near Tokyo, and the Russian space agency Roscosmos in Star City.

Space.com spoke with Cassidy prior to the series’ launch to learn more about his memories of filming the show, depicting the real dangers of traveling and working in space, how the project all came together, and what he’ll miss most as he enters retirement from NASA.

Space.com: What was your experience like working on “Among the Stars” for two years and having cameras constantly around?

Chris Cassidy: That was one of the things that were eye-opening to me. How much back-planning it takes to get a documentary out. And stuff is happening early in the process that was not repeatable. It was fun for me when the crew didn’t know what they didn’t know, helping them understand where they should be in order to not miss out on some of the critical training and some of the things we were testing. And then you have to get used to having the cameras around and having a microphone on all the time and sometimes you forget it’s on.

I’m just so happy that the behind-the-scenes aspect of spaceflight, not just for the crew part, but for all of the team it takes to pull it off, could all be captured in the way it was.

Space.com: What elements of the documentary best exemplify what it means to be an astronaut?

Cassidy: Well, it’s a real honor and a privilege and all of us feel that way. But you also have this feeling that there’s a lot riding on your actions. The show does a great job of demonstrating the hard work of engineers and planners and making the equipment for the repairs. Then it ultimately comes to some human being, the astronaut, who can make mistakes, to put in this new repair and conduct the mission at hand. And that’s one of the things that I hope comes across. You feel the nerves of all that when you go to execute. It’s probably just like stepping onto the field of the World Series’ seventh game or something along those lines.

Space.com: How was it working with director Ben Turner and what were the challenges during the shooting schedule?

Cassidy: It was great to work with Ben and his whole team at Fulwell. They’re a true group of professionals and really skilled at their craft. Some of the challenges are [related to] the international nature of the space station — international training and travel to Moscow and getting approvals on their side to enter facilities that may or may not be used to having cameras present, and getting access to those locations. It was a real challenge for all the countries … Japan and Germany and Russia and of course NASA as well. Just navigating all that was difficult.

Space.com: Watching this series, we’re reminded how hazardous outer space is. As private space tourism ramps up, is there a danger of depicting space travel as a fun playground that’s totally safe and routine?

Cassidy: Yeah, you’re onto something there. There will be an accident. I hate to say that and I don’t mean to be a doomsday person. And it may or may not kill people, but it will definitely be something that makes people realize that it really is hard and really is dangerous.

All systems have redundancies built into them where you can eject off the launch pad during the powered flight, or the rocket can separate the capsule from any catastrophic stuff behind you. But it’s not over until you get picked up on a recovery ship, and there are many things that can catch you. I think that people should use a little caution when they’re thinking about going on a tourist mission to space. But ultimately I encourage everybody to do it. Just do it knowing full well with yourself and your family that there are some risks involved.

Space.com: How did your participation in this new Disney Plus docuseries help give your NASA career a certain perspective?

Cassidy: I was just happy that our crew could help tell the story in a way that it did. And it just so happened there was a lot of stuff that made for an interesting TV series. Looking front to back, COVID was right before we launched and a week or two prior to that one of our crewmembers had an injury to his eye and two cosmonauts changed out at the last minute on my Soyuz mission. And further back, they had to make a decision about which crewmembers were going to be in space at the time when repairs needed to be done. All of those things made for great storylines throughout the documentary series.

Space.com: What do you hope viewers gain from “Among the Stars”?

Cassidy: I hope they take away that astronauts aren’t special people. We’re just doing a cool job and we all think of it that way. When I watch sports documentaries I really like ones that show what it’s like outside of the court or outside of the field, kind of like “The Last Dance” was for the Chicago Bulls. I love that kind of backstory. So I hope that viewers get the same experience with this docuseries to see what all goes on besides just riding a rocket and putting on a spacesuit.

Space.com: What will you miss most about being an astronaut and what’s next for you during retirement?

Cassidy: Well, I’ve already started a new job. I’m talking now from my new office at the National Medal of Honor Museum in Arlington, Texas near the Dallas Cowboys stadium. So retirement was short-lived.

But what I’ll miss most are the wonderful and dear friends I’ve made in the space community, at NASA and around the world. I’ll miss traveling to Moscow and seeing my friends there and having meals with those families. I already miss not having the up-to-date information about what’s going on with space stuff. I need to email my friends and ask why this is delayed or what’s the current launch date. It used to be I’d have those answers and I don’t have those answers anymore.

“Among the Stars” airs all six episodes on Disney Plus beginning Oct. 6.