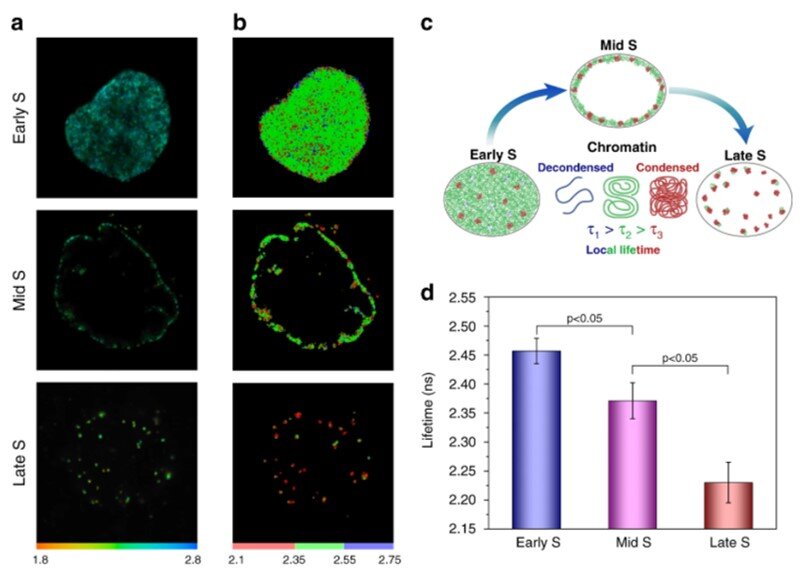 Optical imaging is useful to investigate the structure and function of cellular genomes, but it is nevertheless challenging to image the immensely convoluted and irregular compacted DNA polymer. In a new report now published on Nature, Light: Science & Applications, Svitlana M. Levchenko and a team of researchers in China, Poland, and the U.S., developed fluorescence life-time imaging (FLIM) to advance the genomic structure during DNA compaction. During the work, they used two mechanisms, where one relied on the local refractive index of fluorescence probes incorporated into DNA, and the other relied on the Forster resonance energy transfer process (FRET) between the donor and acceptor fluorophores, also incorporated into the DNA. The team validated the proposed mechanisms using cell culture to reveal a significant difference in gene-rich and gene-poor pools of genomic DNA.

Fluorescence microscopy is a key technique to investigate cellular molecular structure, and includes laser scanning confocal microscopy and multiphoton imaging. The advent of stochastic optical reconstruction microscopy and photoactivated localization microscopy, as well as other super-resolution imaging techniques, allow visualization of the cellular structure to revolutionize research in cell biology. It is, however, still challenging to study intracellular distribution and interactions of biomolecules, therefore researchers have developed the fluorescence lifetime imaging (FLIM) method. In this work, Levchenko et al. proposed and advanced the FLIM approach to collect new layers of information to study 3-D cellular architecture, such as genomic structural organization. While non-coding DNA segments are in densely packed domains, gene-rich sequences are relatively relaxed in configuration to provide access to soluble proteins that catalyze RNA synthesis and post-transcriptional modifications. During the first proposed FLIM-based assay, the team used the quadrate dependence between fluorescence lifetime and local refractive index, responsive to the DNA compaction density. In the second approach, they employed FRET between fluorescence-labeled nucleotides incorporated into the DNA strands.

Refractive index as a function of DNA compaction

The distribution of proteins in genomic chromatin is non-uniform and correlates with the levels of DNA compaction (DNA packaging or condensation) to produce densely packed, heterochromatin domains. Both DNA and proteins equally contribute to the refractive index of chromatin since they are both present in a close mass ratio. As a result, it is tempting to probe the levels of chromatin compaction via the FLIM approach. During the experimental approach, they synchronized the cells with aphidicolin, an inhibitor of DNA polymerase. When the cells entered S-phase, they incubated the cells with bromodeoxyuridine (Brdu) – a halogenated nucleotide to readily incorporate into the newly synthetic DNA strands. The incorporated Brdu did not visibly alter the genomic function, while they permanently remained in genomic DNA. In the next series of experiments, they, studied chromatin compaction beyond the S-phase of the cell cycle. Based on label segregation, Levchenko et al. visualized individual chromosome territories for reduced crowding and effective image analysis. The data supported the notion that the chromosome boundaries were enriched in loosely compact chromatin fibers.

The team then explored the suitability of the FLIM-based approach to probe DNA compaction at the nanoscale via the fluorescence life-time imaging (FLIM)-Forster resonance energy transfer (FRET) technique. The single-strand DNA labelling approach involved double labeling of newly synthesized DNA with halogenated nucleotides such as chloro-deoxyuridine (CldU) and Iodo-deoxy uridine (IdU) for selective detection via immunofluorescence staining. This method offered higher sensitivity to variations in DNA compaction, when compared with refractive index mapping by FLIM (fluorescence life-time imaging). To understand the efficiency of the FLIM-FRET experimental approach, Levchenko et al. labeled replicating DNA in the early S-phase by incubating with halogenated nucleotides, then labeled them selectively with fluorophores for identification. During further experiments, they validated the FLIM-FRET approach to probe the proximity between DNA fibers with different replication timing. The team then acquired fluorescence intensity and lifetime images immediately after incorporating halogenated nucleotides, or several cell generations later when individual chromosome territories could be clearly identified in the cell nucleus. The pilot experiments provided a proof-of-concept for the unique applications of the FLIM-FRET approach to sense DNA compaction. While Levchenko et al. used an immunolabeling protocol, the existing method also allowed replication labelling of chromatin in live cells based on the intracellular delivery of fluorescent nucleotides.

In this way, Svitlana M. Levchenko and colleagues proposed and validated two FLIM (fluorescence life-time imaging)-based methods to study DNA compaction and gene activity. The first approach relied on the correlation between the fluorophore’s lifetime values and the local refractive index to detect variations in nuclear chromatin compaction across the S-phase of the cell cycle. Comparatively, the FLIM-FRET (fluorescence life-time imaging- Forster resonance energy transfer) approach was more sensitive and capable of sensing DNA compaction at the nanoscale. In total, these optical approaches offered new directions for quantitative studies in genomic structure organization.