Mars’ missing water might still be in its crust | EarthSky.org 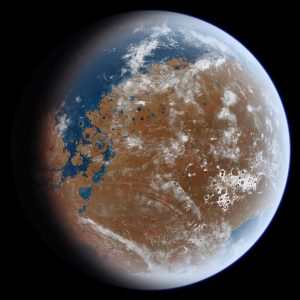 Artist’s concept of ancient Mars with oceans on its surface. A new study says that much or even most of Mars’ water soaked into the subsurface where it remains trapped in minerals today. Image via Ittiz/ AAS Nova/ Wikipedia.

Where did Mars’ water go? Scientists have been trying to answer this question for decades now. It appears there used to be abundant water on the red planet, and today we still see signs of ancient rivers, lakes and maybe even oceans. But, today, Mars’ surface is a cold, bone-dry desert, with an atmosphere too thin to support falling rain. One thought has been that most of the planet’s water leaked into space billions of years ago, after Mars’ magnetic field disappeared, at which time its atmosphere thinned. However, in March, 2021, researchers at NASA’s Jet Propulsion Laboratory and Caltech, both in Pasadena, California, suggested that much, or even most, of Mars’ water – somewhere between 30 to 99 percent – went downward instead of upward. They said their work indicates the missing water on Mars seeped into the planet’s crust, where it’s now trapped in minerals.

The peer-reviewed results were published in the journal Science and presented at the 52nd Lunar and Planetary Science Conference in mid-March.

The new work rests on geological evidence, showing that ancient Mars once had large volumes of liquid water. The scientists said that models of past hydrogen-escape to space, calibrated with observations of the current escape rate, can’t explain what scientists see today. Their new work consists of a new computer simulation of Mars water, incorporating observational constraints from spacecraft, rovers and meteorites. These scientists spoke of what’s called crustal hydration, that is, a chemical reaction where water is added to the crystal structure of minerals. They said:

In our model, the volume of water participating in the hydrological cycle decreased by 40 to 95% over the Noachian period (~3.7 to 4.1 billion years ago), reaching present-day values by ~3.0 billion years ago. Between 30 and 99% of Martian water was sequestered by crustal hydration, demonstrating that irreversible chemical weathering can increase the aridity of terrestrial planets.

Mars as it is today, with only water vapor, ice and some liquid water below the surface. This global view is a combination of about 100 images from the Viking orbiter. Image via NASA/ JPL-Caltech/ USGS.

Previous studies showed that at least some of Mars’ water did leak into space, but the new findings show that much of Mars water went into the ground. As lead author Eva Scheller at Caltech stated:

Atmospheric escape doesn’t fully explain the data that we have for how much water actually once existed on Mars.

How much water did Mars use to have?

Current estimates say there was enough to form an ocean anywhere from about 100 to 1,500 meters (330 to 4,920 feet) deep, roughly half the volume of the Atlantic Ocean. Whether there actually was an ocean is still debated, but growing evidence has pointed to an ocean once existing in the lowlands of the northern hemisphere. We do know, however, from orbiters, landers and rovers, that there used to be lakes and rivers on Mars.

Today, Mars is frozen; it’s a world with extensive permafrost below its surface, as well as polar ice caps. But – aside from the new study being discussed here – there’s also now evidence for subsurface lakes deep below Mars’ south pole, kept liquid by salts.

How did the scientists determine that much of Mars’ water went underground?

They utilized data from multiple Mars missions as well as lab work involving meteorites. In order to gain a comprehensive view of the history of water on the planet, the researchers studied how much water was on the planet in all forms – vapor, liquid and ice – from Mars’ early history until now. They also looked at the chemical composition of the current Martian atmosphere and crust. The ratio of deuterium to hydrogen was of particular interest. What would all this tell them?

The new study was led by Eva Scheller at Caltech. Image via Eva L. Scheller.

Water is composed of hydrogen and oxygen atoms. Most hydrogen atoms have one proton, but a small number, 0.02 percent, have both a proton and neutron. These atoms are called deuterium or “heavy” hydrogen.

When a planet or other body loses water, it is much easier for the lighter hydrogen atoms to escape into space. Deuterium atoms, however, would tend to get left behind, since they are heavier.

The same thing happens on Earth, but there is one big difference. The water in Mars’ crust is permanently trapped there, since the planet has no plate tectonics, where the outer crust is divided into large slabs of rock called plates. On Earth, old crust melts in to the mantle, which forms new crust at the boundaries of the plates. The water is continuously recycled back into the atmosphere by volcanism. Michael Meyer, lead scientist for NASA’s Mars Exploration Program, said:

The hydrated materials on our own planet are being continually recycled through plate tectonics. Because we have measurements from multiple spacecraft, we can see that Mars doesn’t recycle, and so water is now locked up in the crust or has been lost to space.

NASA’s Perseverance rover, seen here during its landing on February 18, 2021, will collect samples of rocks and soil for later return to Earth. Those will also provide valuable clues about the history of water on Mars. Eva Scheller and Bethany Ehlmann will assist in the operations of the rover to acquire those samples. Image via NASA/ JPL-Caltech.

The results also have implications for Mars’ potential habitability, which is why scientists want to know just how the planet lost most of its water and when. NASA’s Perseverance rover is about to start searching for evidence of past microbial life in Jezero Crater, which used to be a lake, complete with river delta. The rover will collect samples of rocks and soil to be returned to Earth by a subsequent mission, and both Scheller and co-author Bethany Ehlmann will assist in that historic task. The samples will also provide important clues about climate change and water loss on Mars.

Bottom line: According to a new study released in March 2021, a lot of – perhapsmost of – Mars’ ancient water remains trapped inside the planet’s crust. That’s in contrast to the idea that Mars’ water was lost to space billions of years ago.

Source: Long-term drying of Mars by sequestration of ocean-scale volumes of water in the crust