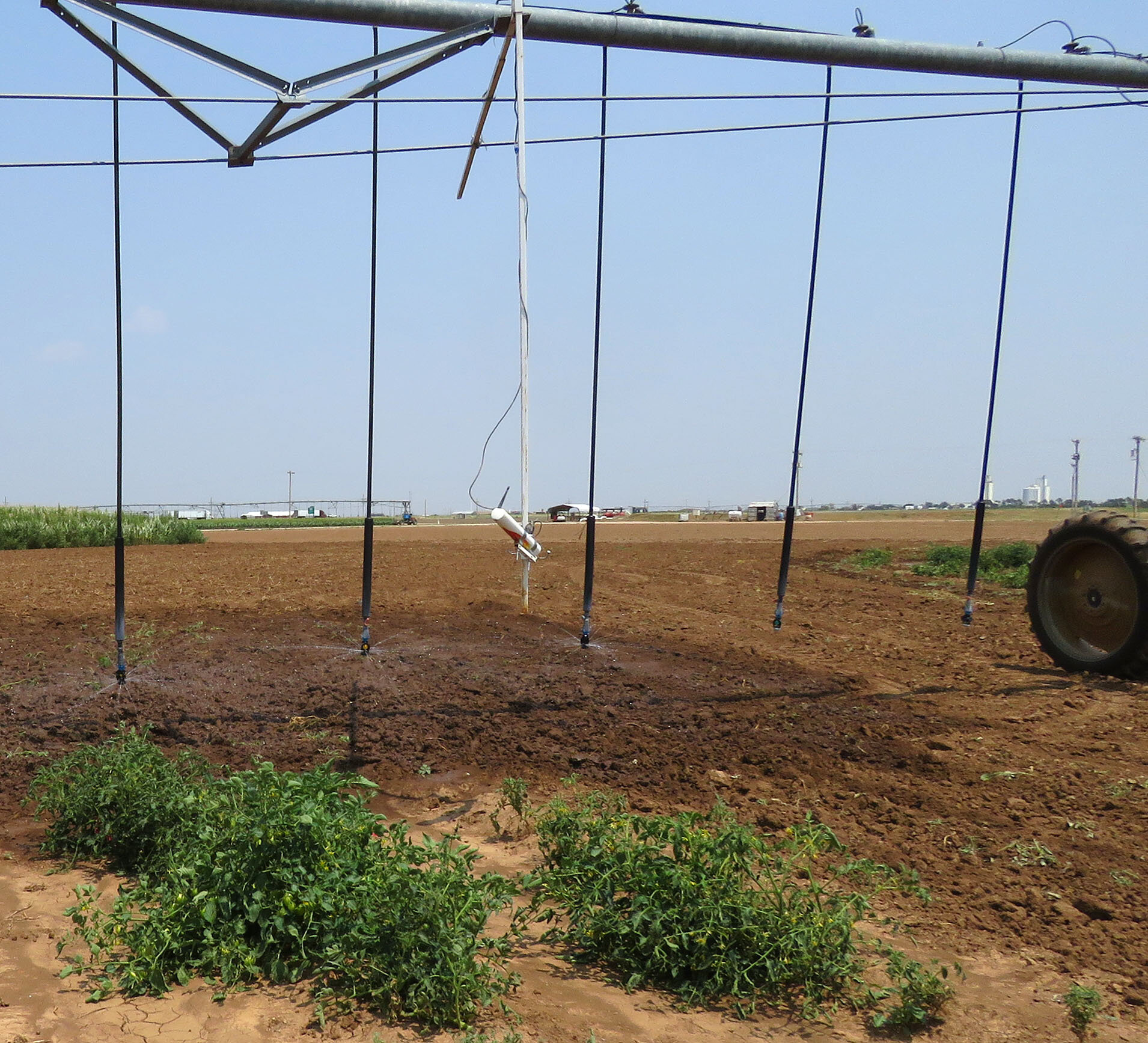 The project comparing types of irrigation and irrigation scheduling is led by Charlie Rush, Ph.D., Texas A&M AgriLife Research plant pathologist and a faculty member in the Department of Plant Pathology and Microbiology within Texas A&M University’s College of Agriculture and Life Sciences, Amarillo.

Rush is working with the U.S. Department of Agriculture-Agricultural Research Service faculty at Bushland and industry partners to investigate the potential of producing high-quality vegetables under irrigation for fresh market sales.

Irrigation systems in the study

Most vegetable farmers use stationary drip irrigation, either subsurface or surface. In contrast, most crop growers in the High Plains grow traditional crops and use center pivots for sprinkler irrigation.

“We want to look for options for Texas High Plains producers to use specialty crops to diversify their operation and have the potential to get higher returns for their water,” he said. “We know high-value crops do best under drip irrigation. However, most producers have already invested in center pivot systems, so we feel this study will let them see if it will be worth their time to retrofit those with draglines.”

The MDI system attaches to existing center pivot irrigation systems and applies water directly to the soil surface as the driplines are dragged across the field to provide uniform wetness.

The LESA irrigation system is representative of traditional irrigation in most fields. It includes spray nozzles that hang from the center pivot and place the water application about 2 feet from the soil surface.

The study included four replications of each MDI and LESA, with 10-foot row spacings and 26 inches between plants. Production was compared to that using traditional stationary drip as a control. While the plan was to use both tomatoes and watermelons, herbicide drift damaged the tomatoes. So, the same variety of watermelon was planted across the entire test.

The team transplanted the watermelon plants from the greenhouse on May 27. Harvests were Sept. 1, Sept. 15, Oct. 1 and Oct. 15. During the second and third harvests, they selected an equal amount of fruit for quality analysis. The LESA tests did not make it to the fourth harvest, as the plants had died back by then.

Adhikari said there was no difference in the sugar content and fruit size of the watermelons between the treatments. But there were significant differences in other areas, including:

During the first phase of the experiment, from planting to mid-July, the same amount of water was applied with LESA and MDI—1 inch per week for a total of 9 inches, Adhikari said. During the remainder of the growing season, neutron probe readings of each plot dictated how much water the plot would receive.

The yields recorded include:

“Since the water applied was less with MDI, and the yield was higher, the overall water-use efficiency was higher under MDI,” Adhikari said. “MDI allows the water to be applied directly to the root zone, while the LESA application doesn’t all fall on the root zone, affecting everything from forage to fruit. More of the water evaporates and is inaccessible under LESA.”

Rush said this initial year of study offers promise. The study will be repeated in 2022 to see if similar results are recorded.