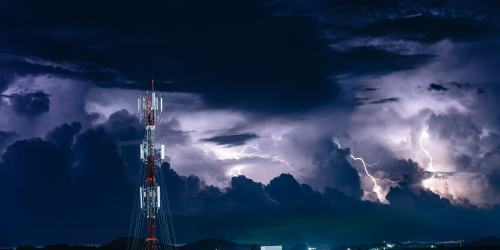 Since the 1970s, telecommunications engineers have studied the absorption and scattering of microwave signals by rainfall and other weather conditions [2]. Raindrops are the dominant cause of signal attenuation, as their diameters roughly match the wavelengths of the gigahertz signals used for microwave links. Theoretical and experimental studies have concluded that, for any microwave frequency, the signal loss per transmission distance increases with the amount of rain along the link. Specifically, the loss is proportional to the rainfall rate raised to a certain power that depends on the signal parameters and environmental variables.

Despite its potential, rainfall monitoring with telecommunications data did not become practical until the widespread adoption of mobile phones. The breakthrough came in around 2006, with the realization that the then four million CMLs in the world could serve as rain gauges [3]. In the decade that followed, rain monitoring systems were installed in several European countries, where they provide additional meteorological data. In Africa, however, adoption has been slower.

During the monsoon season of 2012, Marielle Gosset of Geosciences Environment Toulouse in France and colleagues conducted a first-in-Africa test of rainfall monitoring based on CMLs in Burkina Faso [4]. In collaboration with the national mobile network operator Telecel Faso, Gosset’s team measured attenuation in a 7-GHz signal transmitting along a 29-km-long microwave link. The CML-based system successfully detected 95% of rainy days, and the amount of rainfall that it estimated was in good agreement with measurements from a rain gauge placed in the same location.

A similar test was reported in 2019 by David from AtmosCell, Kingsley Kumah from the University of Twente in the Netherlands, and their colleagues. The team gathered signals from four CMLs that spanned several kilometers over tea farms in Kericho, Kenya. For comparison, they placed rain gauges on several farms, whose owners “were very interested in why we were measuring the data and wanted to know how they could do it themselves,” Kumah says. The study showed that CMLs could record rainfall events that fell outside of the locations where rain gauges were placed.

In subsequent work, Kumah and colleagues performed a joint analysis of rainfall estimates from CML and from satellite data [5]. Satellites cover large areas, but they can only give an average that lacks information about specific regions. “You’d expect that if you’re measuring the same thing in three ways, you’d find similar things. But that’s not the case for rain gauges, satellites, and microwave links,” explains Kumah. However, despite their differences, each has their utility. CML methods, in particular, can provide local detail that satellites miss while surveying more territory than a sparse network of gauges.