Moments of silence point the way toward better superconductors 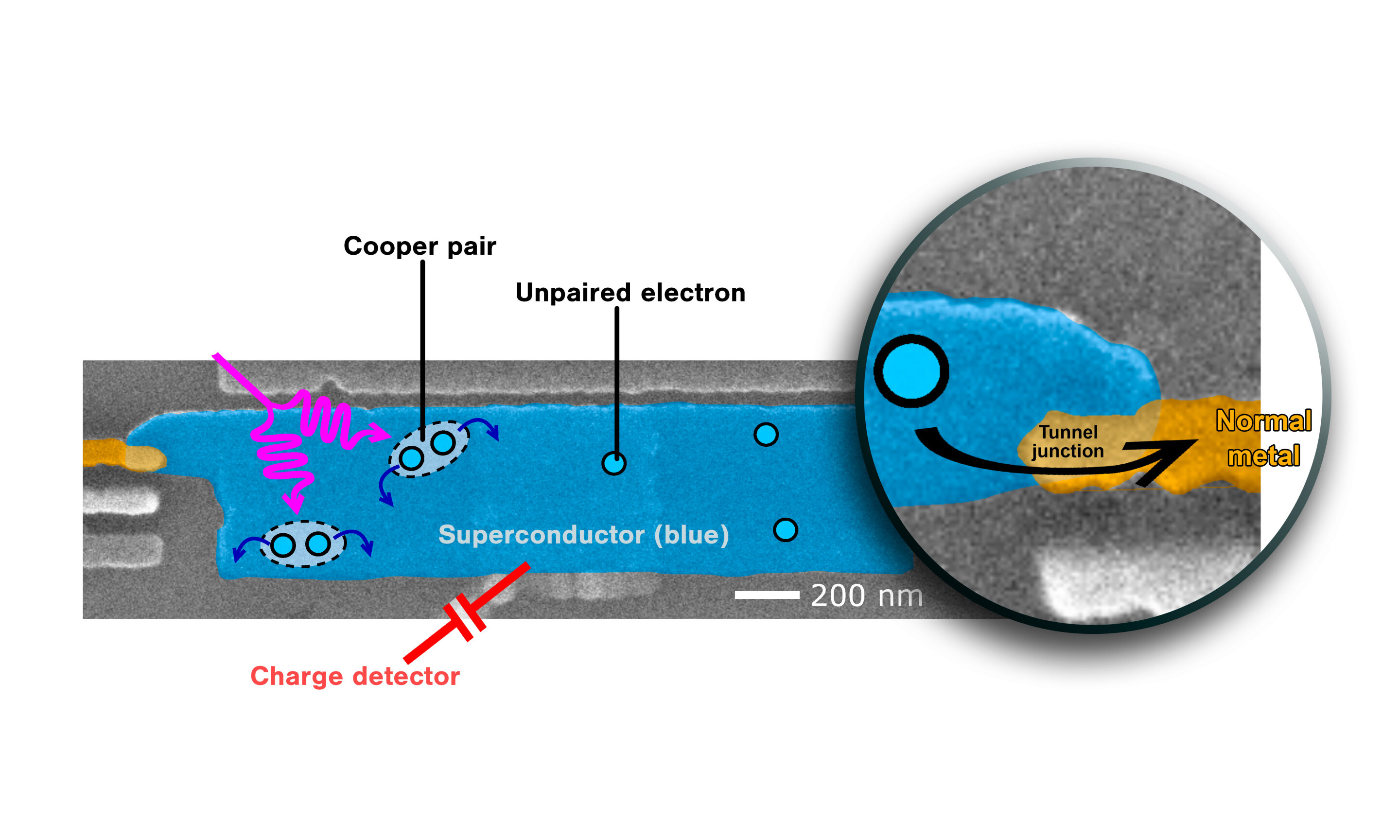 High-precision measurements have provided important clues about processes that impair the efficiency of superconductors. Future work building on this research could offer improvements in a range of superconductor devices, such quantum computers and sensitive particle detectors.

Superconductivity depends on the presence of electrons bound together in a Cooper pair. Two electrons become coupled because of interactions with the metal lattice, synchronizing with each other despite being hundreds of nanometres apart. Below a critical temperature, these Cooper pairs act as a fluid which doesn’t dissipate energy, thus providing no resistance to electrical current.

“Even if there was only one quasiparticle per billion Cooper pairs, that would limit the performance of quantum bits and prevent a quantum computer from operating flawlessly,” says Elsa Mannila, who researched quasiparticles at Aalto University before moving to the VTT Technical Research Centre of Finland. “If there are more unpaired particles, the lifetime of qubits is also shorter,” she adds.

Understanding the origin of these quasiparticles—in other words, knowing why Cooper pairs break—would be a step toward improving the performance of superconductors and the many technologies that rely on them. To answer that question, researchers at Aalto precisely measured the dynamics of Cooper pair breaking in a superconductor.

“People usually measure the average number of quasiparticles, so they don’t know what the sequence is like over time. We wanted to find out exactly when Cooper pairs break and how many pairs break at the same time,” explains Professor Jukka Pekola of Aalto University.

Together with researchers from Lund University and VTT, the team at Aalto set up an experiment to detect smalls number of quasiparticles in real-time. The apparatus consisted of a micron-scale aluminum superconductor separated from a normal conductor—metallic copper—by a thin insulating layer. When Cooper pairs in the superconductor broke, the quasiparticles would tunnel through the insulation to the copper, where the researchers observed them with a charge detector.

“The challenge was really in getting many things to work together,” says Mannila. The analysis depended on having only a small number of quasiparticles, which meant the experiment at Aalto’s OtaNano facility had to be shielded from radiation and external disturbance as well as being cooled to nearly absolute zero. The researchers also needed to detect tunneling events in real-time with a resolution of microseconds, which they accomplished with an ultra-low-noise superconducting amplifier developed by Quantum Technology Finland and VTT.

The researchers found that Cooper pairs break in bursts, with long periods of silence interrupted by very short flurries of quasiparticles. “The picture that emerged is that there is mostly silence and then sometimes one or more Cooper pairs breaks, and that leads to a burst of tunneling,” says Mannila. “So a single breaking event might break more than one Cooper pair at a time.”

The silent periods were several orders of magnitude longer than the bursts. The superconductor was entirely free of quasiparticles for seconds at a time, which is much longer than required for a qubit operation. “One always wants to get rid of quasiparticles,” says Pekola. “Our study marks an important step towards building ideally functioning superconducting devices.”

“What on Earth makes Cooper pairs break? That’s actually the key question,” says Pekola. The energy to break a Cooper pair has to come from somewhere, and the dynamics the researchers observed provide an important clue.

Over the course of about 100 days, the researchers found that quasiparticles bursts became less frequent in their experiment. “Time-dependent Cooper pair breaking hasn’t been observed before, so that was interesting and surprising,” says Mannila.

An even more interesting result appeared when they reset the apparatus and tried again. “When the experiment was started over, everything began from scratch,” says Pekola. “The rate at which quasiparticles appear depends on how much time has passed since we cooled the system to its lowest temperature.”

These dynamics narrow the range of explanations for Cooper pair breaking. Any external source, like cosmic rays and other radiation sources, would have to become less common over time and reset after about 100 days to match the changes seen in the experiment.

“This rules out many or most things which has been proposed,” says Mannila. “We’ve shown that something is going on which has these long time delays, and that isn’t something people would usually look for. Now that the idea is out there, people can look at these time scales in different systems for an explanation.”

To Pekola, the fact that the rate of quasiparticle events decreases with time but not in an exponential manner is an important clue about the source of energy to break Cooper pairs. “The restlessness at the beginning might stem from impurities in the materials. These impurities cool down much more slowly than the device,” he says. These small differences within the system could result in the release of enough energy to break Cooper pairs, though this remains speculation.

Pekola plans to continue with experiments using two or more detectors to pin down the source of these quasiparticles. By looking for correlations between quasiparticle bursts in several devices, he hopes to get more clues about precisely where the processes driving Cooper pair breakage happen.

MKID detectors turn out to have 100 times lower noise