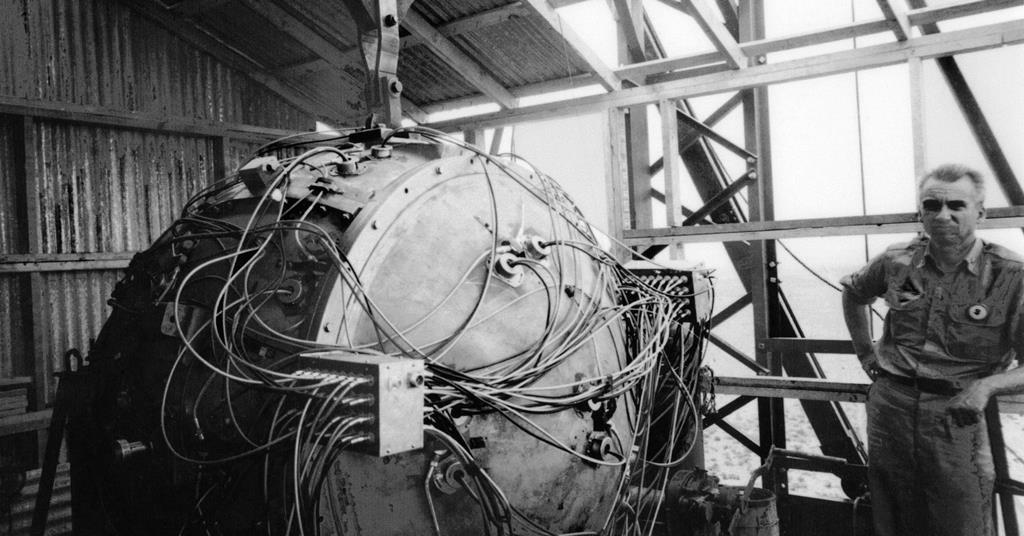 Scientists have found what might be the oldest synthetic quasicrystal in the debris of the first-ever atomic bomb test almost 76 years ago.

The report brings together two of the strangest phenomena in chemistry. On 16 July 1945, the Trinity test became the first nuclear detonation, carried out in the New Mexico desert as part of the Manhattan Project during the second world war. In the resulting explosion, particles of silicate-based desert sand were sucked up into the blast’s fireball, before raining down as a glassy mineral called trinitite. These fragments are usually green, but occasionally red trinitite is also found, created from where the sand fused with copper oxide from the test’s recording equipment. The exact conditions that led to the formation of trinitite are still unknown, and it remains a crime to remove the rocks from the desert.

Now, a group led by geologist Luca Bindi from the University of Florence, Italy, and theoretical physicist Paul Steinhardt from Princeton University, US, have reported a new icosahedral quasicrystal, Si61Cu30Ca7Fe2, found inside a 1cm-long sample of red trinitite. Quasicrystals are yet another scientific puzzle. Their atomic structure is ordered but their pattern doesn’t repeat like in regular crystals. This was something thought to be impossible until their Nobel prize-winning discovery by Dan Schechtman in the 1982, with Steinhardt suggesting the name ‘quasicrystal’.

Knowing that high temperature, high pressure environments could create quasicrystals, the team decided to investigate nuclear explosion debris from the Trinity test. As most quasicrystals are metallic alloys, the group isolated 12 ‘metallic blobs’ from their sample and examined them using x-ray diffraction. This revealed one metal droplet that contained a structure with fivefold, threefold and twofold symmetry axes – a combination that can only exist in a quasicrystal.

The trinitite sample is likely to be the first quasicrystal humans ever synthesised, albeit unknowingly. Prior to the Trinity test scientists were unable to create the extreme environments necessary for such a material to form. The work follows on from Bindi and Steinhardt’s discovery of the first naturally occurring quasicrystal, icosahedrite (Al62Cu24Fe13), found in the Khatyrka meteorite in 2010, which may date back to the origins of the solar system.

Chloe Bonamici, an assistant professor at the University of Wisconsin–Madison specialising in isotope geochemistry, says the work supports the idea that ‘inside a nuclear fireball is a very unusual bonding environment’. ‘The discovery may also lend support to the idea of an important role for condensation from vapours and plasmas in a nuclear fireball, as many man-made quasicrystals are produced by vapour deposition and plasma spraying processes,’ she adds.

The discovery means other atomic test sites could yield new quasicrystals, helping us to understand how they can form in nature as well as give us a clearer picture of the complex forces at play inside a nuclear explosion. ‘Right now,’ Bonamici says, ‘the quasicrystal is one tiny, tantalising mystery inside of another, bigger mystery.’