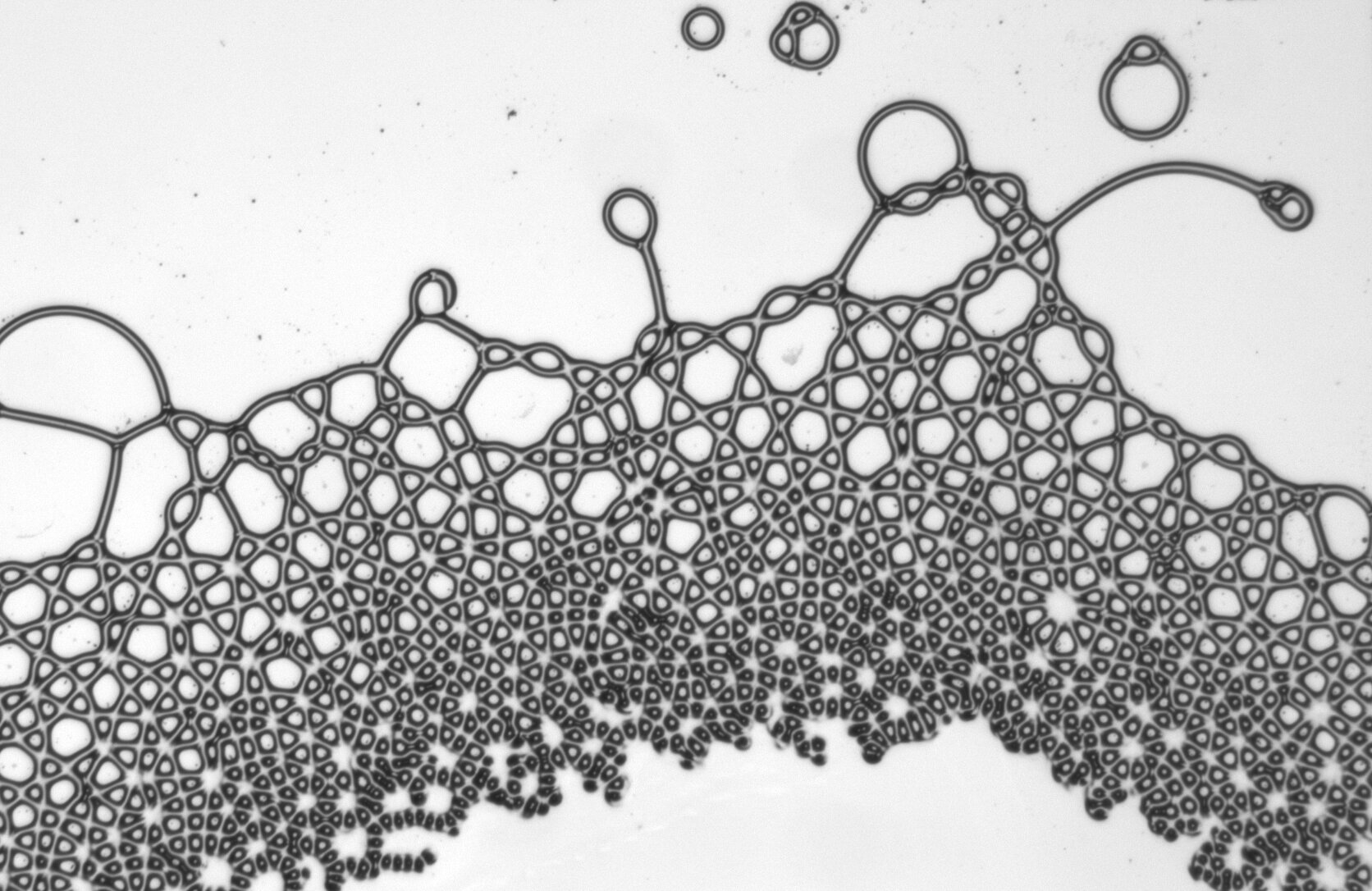 When two substances are brought together, they will eventually settle into a steady state called thermodynamic equilibrium; examples include oil floating on top of water and milk mixing uniformly into coffee. Researchers at Aalto University in Finland wanted to disrupt this sort of state to see what happens—and whether they can control the outcome.

“Things in equilibrium tend to be quite boring,” says Professor Jaakko Timonen, whose research group carried out new work published in Science Advances on 15 September. “It’s fascinating to drive systems out of equilibrium and see if the non-equilibrium structures can be controlled or be useful. Biological life itself is a good example of truly complex behavior in a bunch of molecules that are out of thermodynamic equilibrium.”

In their work, the team used combinations of oils with different dielectric constants and conductivities. They then subjected the liquids to an electric field.

“When we turn on an electric field over the mixture, electrical charge accumulates at the interface between the oils. This charge density shears the interface out of thermodynamic equilibrium and into interesting formations,” explains Dr. Nikos Kyriakopoulos, one of the authors of the paper. As well as being disrupted by the electric field, the liquids were confined into a thin, nearly two-dimensional sheet. This combination led to the oils reshaping into various completely unexpected droplets and patterns.

The droplets in the experiment could be made into squares and hexagons with straight sides, which is almost impossible in nature, where small bubbles and droplets tend to form spheres. The two liquids could be also made to form into interconnected lattices: grid patterns that occur regularly in solid materials but are unheard of in liquid mixtures. The liquids can even be coaxed into forming a torus, a donut shape, which was stable and held its shape while the field was applied—unlike in nature, as liquids have a strong tendency to collapse in and fill the hole at the center. The liquids can also form filaments that roll and rotate around an axis.

“All these strange shapes are caused and sustained by the fact that they are prevented from collapsing back into equilibrium by the motion of the electrical charges building up at the interface,” says Geet Raju, the first author of the paper.

One of the exciting results of this work is the ability to create temporary structures with a controlled and well-defined size which can be turned on and off with voltage, an area that the researchers are interested in exploring further for creating voltage-controlled optical devices. Another potential outcome is the ability to create interacting populations of rolling microfilaments and microdroplets that, at some elementary level, mimic the dynamics and collective behavior of microorganisms like bacteria and microalgae that propel themselves using completely different mechanisms.

The research was carried out at the Department of Applied Physics in the Active Matter research group, led by Professor Timonen. The paper “Diversity of non-equilibrium patterns and emergence of activity in confined electrohydrodynamically driven liquids” is published open-access in Science Advances.