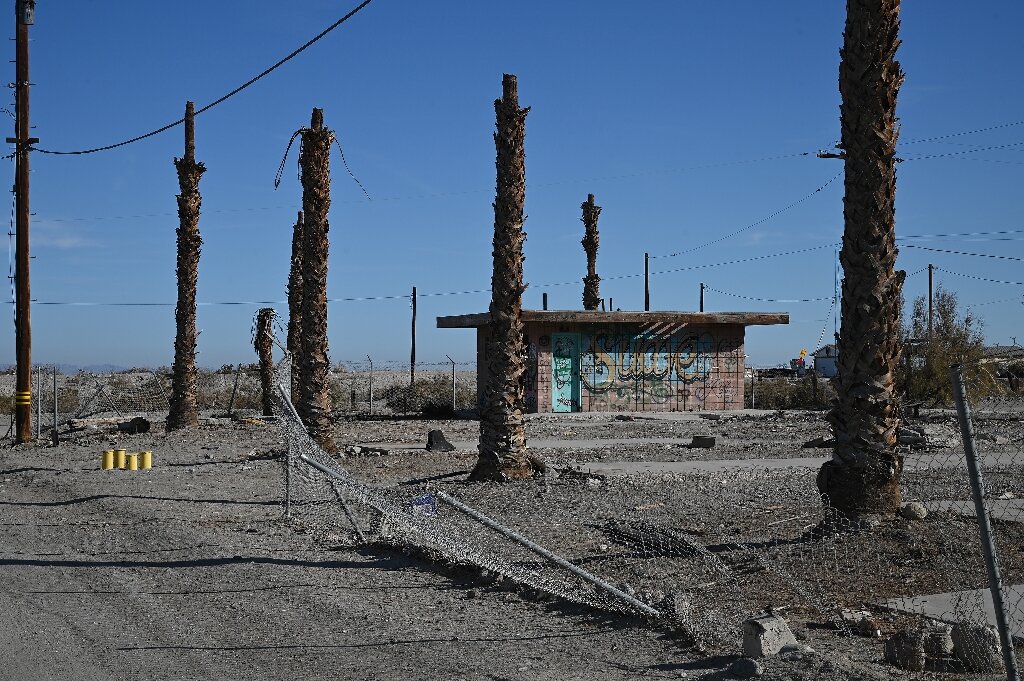 Hollywood’s jetset once crowded the shores of the Salton Sea, a then-idyllic southern California playground for the wealthy. Today, it is desolate and depressed—the evaporating water leaving behind dead shellfish, dust and chemicals that irritate the airways.

The increasingly valuable metal, whose supply is concentrated in a few global pockets, is vital for the rechargeable batteries expected to cleanly power the cars and homes of our polluted planet’s future.

For now, the Australian firm only has a huge drill boring into the ground at the site of a planned geothermal plant and lithium production site.

But by 2024, Turner says, this spot could be producing 20,000 tonnes of lithium hydroxide every year—enough to make batteries for 400,000 Teslas.

Lithium demand for use in batteries is expected to double by the end of the decade, says Juan Carlos Zuleta, who specializes in the economics of the metal.

At present rates, lithium hydroxide is worth over $25,000 per tonne, a price that has risen more than 250 percent over the last year.

Such mineral wealth could prove a boon for an area that ranks among California’s poorest.

But the Salton Sea has seen promises disappear before, like mirages in its unforgiving desert climate.

The Salton Sea has formed and evaporated several times over the millennia, but its latest iteration arose at the start of the 20th century when the Colorado River overflowed.

That created a 300-square-mile (800 square kilometers) inland sea, around which resorts such as Salton City and Bombay Beach flourished, offering fishing, swimming and sunbathing.

But with no natural water source—other than California’s unreliable rain—feeding the sea, it is shrinking. Evaporation is increasing the salinity of the remaining water.

This process also leaves behind chemicals from farmland runoff, which settles in the dusty shores and is whipped up by the wind, contributing to a high rate of asthma in the area.

The Salton Riviera, a tourist promise that once threatened to dethrone nearby Palm Springs, is now just a collection of corroded buildings.

Salton City languishes, and no one swims or fishes in the water any more. Imperial County, in which it all sits, has a 15.5 percent unemployment rate, one of the highest in the country.

“We need things here. You’re in the poorest county in the state of California,” says Ernie Hawkins, owner of the Ski Inn bar in Bombay Beach.

Ironically, the desolation of Bombay Beach has been its saving grace in recent years: its dystopian landscape is a draw for artists, who now form a part of the 300-strong community.

Hawkins says his bar, covered floor to ceiling with dollar bills, is surviving even the pandemic, and that the riches that lithium deposits offer could really help.

A few miles north, in Calipatria, there is skepticism about how the community will benefit from the venture.

“We heard that there will be more jobs, that they will open other plants, but we haven’t seen anything change. We have to wait,” says Juan Gonzalez, an employee in a tire shop, one of the few businesses operating in the city.

From its shoreline, littered with dead crustaceans, the Salton Sea seems endless.

Diamond sees “a unique opportunity” in the promise of lithium, but only if it is handled correctly.

“I think that there’s really no reason that it can’t be like a poster child for success in alternative energy development,” he said.

“That opportunity is squarely on the table and it’s really up to the community and the lithium operators, whether or not that’s the story, or if it’s a story of conflict, and another chapter in the long story of this region being left out economically.”

For Hung, the opinions of the residents are important, but they are not the only consideration—lithium extraction can have environmental consequences.

“They need to really think about what would happen if the water continues to recede, and they continue to expand,” she says.

CTR’s Turner says the company plans to use geothermal sources to power the plant, which will extract a lithium brine.

The metal will be separated from this liquid, and the remnants returned to the earth, minimizing any environmental impact, in a cyclical process he says is far less harmful than other large-scale extraction methods around the world.

He insists that this will position the United States—which currently has only one lithium operation, in Nevada—to compete in a future where batteries are a vital link in the renewable energy chain.

Turner’s enthusiasm is infectious to some on the quiet, desert shores of the Salton Sea.

“I’m gonna put an electric (charging) station out here,” says Hawkins, gesturing to the front of his bar.

“Once it starts, the possibilities are going to be endless. Who knows, maybe I’m a dreamer.”

Sizing up the challenges in extracting lithium from geothermal brine