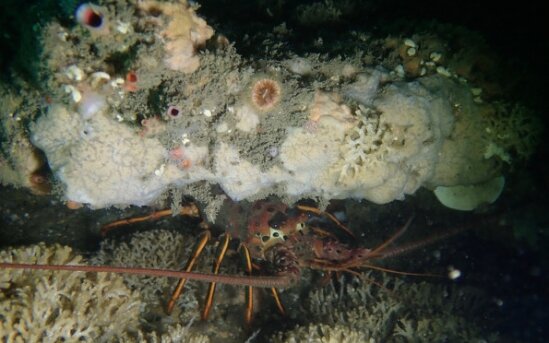 The ocean is a big place with many deep, dark mysteries. Humans have mapped no more than 20% of the sea, and explored less. Even the kelp forests of Southern California—among the best studied patches of ocean on the planet—hide species not yet described by science.

Now, UC Santa Barbara’s Thomas Turner has published a paper in the journal Zootaxa describing four new species of sponges. These novel specimens weren’t dredged from the murky depths or found on some distant seamount, but collected locally from popular dive spots. The study brings Turner’s new species count to five, and the scientist believes there may be dozens yet to discover and describe along the West Coast.

Turner, an associate professor in the Department of Ecology, Evolution, and Marine Biology, collected hundreds of samples by hand from dives he conducted all around Southern California. He made sure to photograph each sponge in its natural habitat, documentation that will provide a wealth of information not otherwise available once a specimen goes into a collection. Back in the lab, he got to work analyzing their anatomy and sequencing their genes.

In 2020, Turner described his first new species of sponge using these molecular techniques: Galaxia gaviotensis, which he found just west of Santa Barbara. He suggested the common name Gaviota galaxy sponge. “Like a galaxy, the type species of the genus is packed with a diversity of stars,” he wrote, referring to the shape of its spicules, microscopic objects that provide structural support to many sponges.

The four species in the new paper appear to a layperson as nondescript beige patches on kelp forest rocks. At first, Turner couldn’t even tell what order they belonged to. But while the simple creatures can be hard to distinguish visually, their genomes can reveal their differences. So this is where Turner focused his efforts.

“When I got the DNA, and I was shocked to learn that they were in Scopolinida, which is almost entirely tropical,” he said. Species in this order were unknown from the west coast. In fact, no one had documented Scopolinid sponges anywhere in the eastern Pacific.

And laypeople have certainly come across at least two of these species. “They live out in the open; divers have been swimming past them for decades,” Turner said. He even found pictures of one of them on the citizen science app iNaturalist. “They’re all over Southern California, super common. Just no scientist has ever picked one up and looked at it to try to figure out what it was.”

When naming a new species, a scientist often try to highlight a salient characteristic of the organism. This is challenging to do for a bunch of beige splotches. So Turner named two after the locations where he found them: S. goletensis, for the town of Goleta; and S. kuyamu, for the village of Kuyamu, a community of Barbareño Chumash that once stood onshore at the site where the sponge was discovered. Based on their genomics, Turner concluded that these two are sister species, more closely related to each other than any other known sponges.

Turner coined the name S. jali for the third species after the patterns on its surface, which reminded him of a jali, a latticed screen common in Indo-Islamic architecture. He named the final species after Nausicaä, a character in the Hayao Miyazaki film “Nausicaä of the Valley of the Wind.” The film is about humans and nature, he explained, and a lot of the weird organisms in the fictional world filter and clean the environment like a sponge. In fact, sponges are unique in consuming even viruses and bacteria, he added; many other filter feeders forgo these minute morsels in favor of much larger plankton.

The animals have also caught the attention of biomedical researchers. Given how porous they are, sponges are much more intertwined with their external environment than any other animal. As a result, they have to actively manage their bacterial and viral loads. This has led sponges and their microbiota to produce a lot of antimicrobial and even anti-cancer compounds, Turner said.

Despite their long evolutionary history, most sponges have retained similarities like a simple body plan and filter-feeding lifestyle. Sponges’ simplicity and similarity has long vexed scientists, who used to classify life based on morphology: the form and function of organisms. “For basically 200 years, taxonomists have struggled to figure out how to classify the sponges because they offer so few morphological characteristics,” Turner remarked.

Only in the past few decades have researchers straightened out the different orders of sponges. “A taxonomic order is a pretty big group of animals,” Turner continued. “For example, cats, dogs and walruses are all in the same order: Carnivora.”

Taxonomy is never carried out just for taxonomists. It’s done to lay a foundation for researchers in other fields to build upon. “Trying to conduct research without taxonomy is kind of like if you went to the Library of Congress and there weren’t any librarians, and all the books were just in a big pile,” Turner said. “There’s plenty of information there, but you can’t do anything with it. The taxonomist’s job is the librarian’s job: to organize all that information so that everyone else can study it.”

Ecologists are often at a loss when it comes to sponges, Turner explained, simply because the taxonomy and systematics haven’t been done to figure out what’s what. That’s the situation that greeted Turner when sponges first caught his interest a few years ago.

“I was diving recreationally in the kelp forest here, and I was seeing all these sponges,” he recalled. “I couldn’t tell what they were; I didn’t know what was important to them; I couldn’t tell what was different from one to another; and I was getting really frustrated.” Finally, he decided that someone needed to straighten this out, and it might as well be him.

Turner’s experience as a scientific diver combined with his background in genomics made him perfectly suited to begin sorting out the taxonomy and systematics of West Coast sponges. Since 2018 he has collected about 800 specimens. The four species in this paper, plus the one from 2020, are just the beginning of his work describing perhaps 100 new species and adding critical information to hundreds of others.

DNA sequencing offers a path forward to understanding these animals, but there’s still a lot of painstaking morphological analysis in Turner’s future. That’s because, by combining these two methodologies, he can bridge the gap between modern molecular biology and our historical reliance on physiology. “That is the only way out of this morass that we’re in regarding sponge taxonomy,” Turner said, “combining the morphology with the genetics.”

Unfortunately, many sponge specimens were preserved in ways that did not safeguard the animals’ DNA. This will make it a challenge to bring old collections into the era of molecular biology. In that light, Turner is applying for funding to investigate how to extract DNA from old sponge samples.

As perhaps the only sponge taxonomist on the U.S. Pacific coast, Turner also intends to continue his research on the region’s sponges. He plans to start sequencing the whole genomes of sponges he’s collected, looking for patterns of molecular evolution to try and sort out what makes one different from another, and what that can tell us about their ecology and evolution. His research is supported by The Southern California Bight Marine Biodiversity Observation Network (SCB MBON), a long-term collaboration led by UC Santa Barbara’s Robert Miller. The results should elucidate the roles these animals play in their ecosystems.

“It’s all about building a foundation that lots of other people can hopefully build upon,” he said, “and establishing a new direction for marine study in California wherein people can use sponges in their research.”

Citation:
Researcher describes four new species of sponge that lay undiscovered in plain sight (2021, May 17)
retrieved 17 May 2021
from https://phys.org/news/2021-05-species-sponge-undiscovered-plain-sight.html

Prehistoric fish is also poised for a comeback