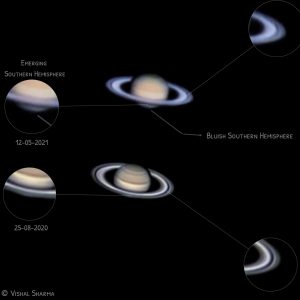 View at EarthSky Community Photos. | Vishal Sharma in Greater Noida Extension, Uttar Pradesh, India, captured these images of Saturn in August 2020 and on May 12, 2021. Vishal wrote: “A tip of bluish southern hemisphere is visible at bottom, which started to emerge into sunlight after many years of darkness.” Thank you, Vishal!

Saturn’s year, or 1 trip in its orbit around the sun, is equal to nearly 30 Earth-years. The tilt of Saturn’s axis is 26.7 degrees, fairly close to Earth’s 23.5 degrees. So Saturn has four seasons just as Earth does … although Saturn’s seasons each last more than seven Earth-years. Right now, Saturn’s southern hemisphere is moving from winter to spring. As it does, earthly astrophotographers are beginning to glimpse that hemisphere of the ringed planet – a world that appears golden overall – as blue.

Saturn, in the outer solar system, gets cold. The hemisphere experiencing winter on Saturn gets especially cold because – it’s not only tilted away from the sun – but also falls under the shadow of the rings for several earthly years. Scientists believe the winter cold causes the clouds in that hemisphere to cool and sink, allowing more blue light to scatter and causing the normally yellow planet to have a blue tinge.

Meanwhile, astrophotographers might want to be on the lookout for the blue color in Saturn’s southern hemisphere. Vishal Sharma in Greater Noida Extension, Uttar Pradesh, India, captured it in the image above. Vishal told EarthSky:

A tip of bluish southern hemisphere is visible at bottom, which started to emerge into sunlight after many years of darkness. Due to this long darkness period most of the heavier aerosols in the upper atmosphere settled lower down. The upper atmosphere at its southern polar region is covered with very tiny and lightweight aerosols that scatter only in the shorter (blue) wavelength. Once Saturn faces the sunlight completely in the coming years, the atmospheric temperature will rise and this region will gradually change its bluish color to a yellowish hue same as in the northern hemisphere.

When have we seen Saturn’s winter hemisphere appearing this blue color before? Closeup images taken from the Cassini spacecraft in 2004 showed the blue of Saturn’s northern hemisphere that was then experiencing winter. The cloud-free upper atmosphere of the winter hemisphere scatters the shorter wavelength blue light rays more effectively in the same way Earth’s sky does, giving the region its blue appearance.

Cassini took this image of Saturn showing blue on the hemisphere that was in winter on December 14, 2004. Image via NASA/ CICLOPS.

In 2005, NASA posted a photo of the blue region on Saturn and explained how its atmosphere – made of hydrogen – scatters more blue light, creating the image taken by Cassini. They wrote that the sunken clouds on the cold hemisphere of Saturn created a color so blue that amateur astronomers on Earth should be able to see it.

Vishal Sharma was one of Earth’s astrophotograhers who proved them correct in 2021 when the southern hemisphere of Saturn began to tilt into view. Thank you, Vishal Sharma, for sharing your photo with us at EarthSky Community Photos!

Bottom line: Scientists believe that when Saturn’s rings cast a shadow on the atmosphere in the hemisphere experiencing winter, clouds cool and sink, allowing for more scattering of blue light and giving a part of the ringed planet a blue tinge. EarthSky community member Vishal Sharma captured a recent astrophoto showing it’s so.