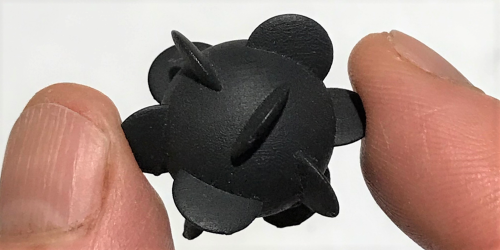 A new experiment finds that a sphere with “fins” maintains its orientation in a flowing fluid, despite a 19th century prediction that it would spin.

In 1871, Lord Kelvin proposed a hydrodynamics brainteaser: Is there an object that looks the same from any direction and that will naturally rotate when it moves through a fluid? Kelvin thought that there was, and he provided a recipe for making this “isotropic helicoid.” In the century and a half that has followed, the idea has been bandied about in textbooks and in scholarly publications, but until today, no experimental test had been reported. Now, Greg Voth from Wesleyan University in Connecticut and his colleagues have tested the idea with a 2-cm-wide helicoid that they created with a 3D printer [1]. The team let the object fall under gravity through a viscous fluid and observed no rotation.

Kelvin’s recipe for making an isotropic helicoid is as follows. Take a sphere and draw around it three circles: one at the equator, one through 0° longitude, and one through 90° longitude. Along each circle, place four vanes, or “fins,” each tilted at 45° to the circle. This arrangement, which resembles a motorboat propeller, has several discrete rotational symmetries that ensure isotropic interactions with the fluid.

Voth and his colleagues modeled the movement of a helicoid through a fluid and found—to first approximation—that the torques on each vane cancel each other out. Their model shows, however, that hydrodynamic interactions between the vanes can allow a net torque to develop, but that this torque was too small to observe for the helicoid that the team fabricated. They suggest that by optimizing the helicoid’s design, researchers could increase the hydrodynamic interactions to the point where the net torque becomes observable.

Michael Schirber is a Corresponding Editor for Physics based in Lyon, France.