Water on Jupiter’s moon closer to surface than thought: study 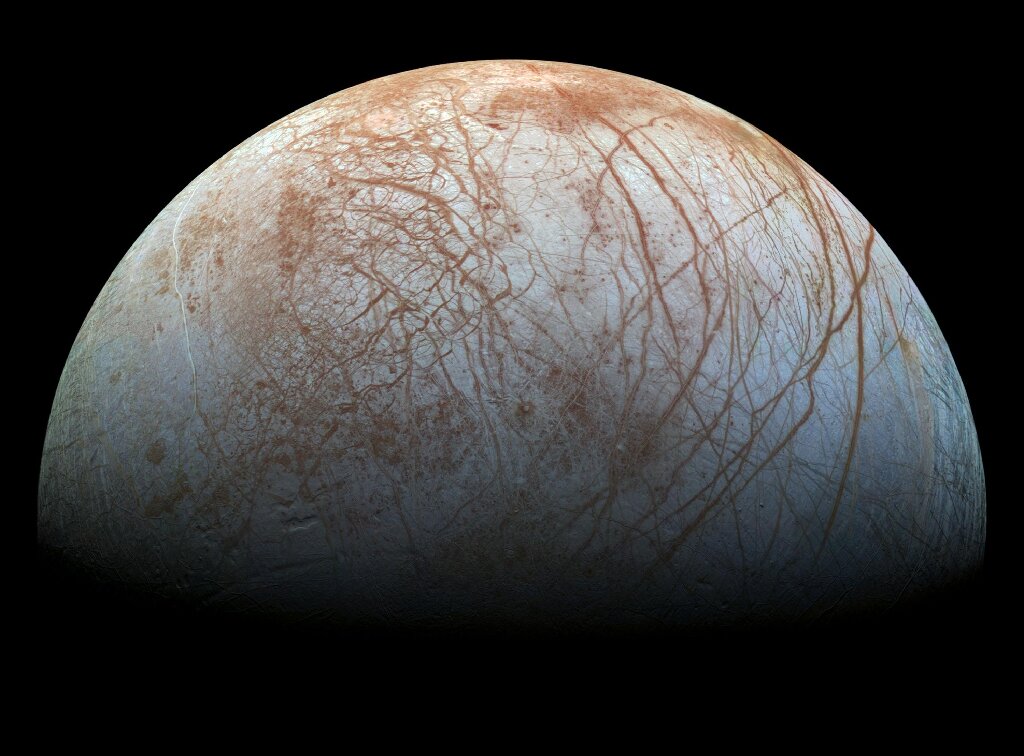 Ridges that criss-cross the icy surface of Jupiter’s moon Europa indicate there are shallow pockets of water beneath, boosting hopes in the search for extra-terrestrial life, scientists said Tuesday.

Europa has long been a candidate for finding life in our solar system due to its vast ocean, which is widely thought to contain liquid water—a key ingredient for life.

There is a problem: the ocean is predicted to be buried 25-30 kilometers (15-17 miles) beneath the moon’s icy shell.

However water could be closer to the surface than previously thought, according to new research published in the journal Nature Communications.

The finding came partly by chance, when geophysicists studying an ice sheet in Greenland watched a presentation about Europa and spotted a feature they recognized.

“We were working on something totally different related to climate change and its impact on the surface of Greenland when we saw these tiny double ridges,” said the study’s senior author Dustin Schroeder, a geophysics professor at Stanford University.

They realized that the M-shaped icy crests on Greenland looked like smaller versions of double ridges on Europa, which are the most common feature on the moon.

Europa’s double ridges were first photographed by NASA’s Galileo spacecraft in the 1990s, but little was known about how they were formed.

The scientists used ice-penetrating radar to observe that Greenland’s ridges were formed when water pockets around 30 meters (100 feet) below the ice sheet‘s surface refroze and fractured.

“This is particularly exciting, because scientists have been studying double ridges on Europa for more than 20 years and have not yet come to a definitive answer for how double ridges form,” said lead study author Riley Culberg, an electrical engineering Ph.D. student at Stanford.

“This was the first time that we were able to watch something similar happen on Earth and actually observe the subsurface processes that led to the formation of the ridges,” he told AFP.

“If Europa’s double ridges also form in this way, it suggests that shallow water pockets must have been (or maybe still are) extremely common.”

‘Life has a shot’

Europa’s water pockets could be buried five kilometers beneath the moon’s ice shell—but that would still be much easier to access than the far deeper ocean.

“Particularly if such water pockets form because ocean water was forced up through fractures into the ice shell, then it’s possible that they would preserve evidence of any life in the ocean itself,” Culberg said.

Water closer to the surface would also contain “interesting chemicals” from space and other moons, increasing the “possibility that life has a shot,” Schroeder said in a statement.

We may not have too long to wait to find out more.

NASA’s Europa Clipper mission, scheduled to launch in 2024 and arrive in 2030, will have ice-penetrating radar equipment similar to that used by the scientists studying Greenland’s double ridges.

The spacecraft is unlikely to find definitive proof of life because it will not land on Europa, instead flying by and analyzing it.

But hopes remain high. The moon’s ocean is predicted to have more water than all of Earth’s seas combined, according to the Europa Clipper’s website.

“If there is life in Europa, it almost certainly was completely independent from the origin of life on Earth… that would mean the origin of life must be pretty easy throughout the galaxy and beyond,” project scientist Robert Pappalardo said on the website.