What is the zodiac? | EarthSky 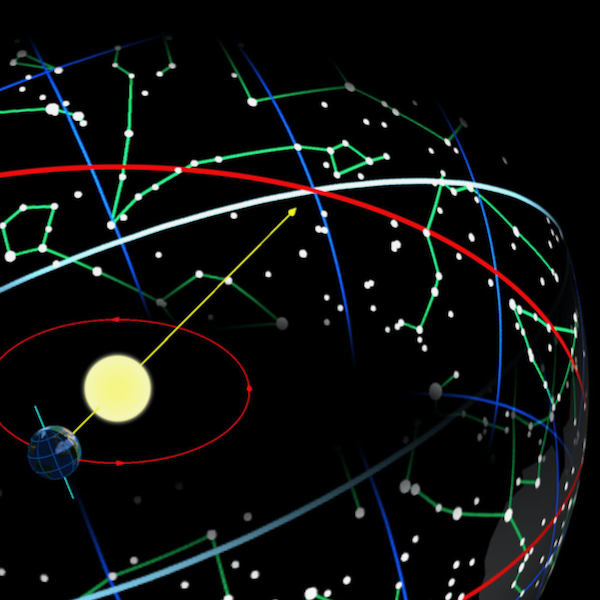 The zodiac, the 12 signs listed in a horoscope, is closely tied to how the Earth moves through the sky. We derive these signs from the constellations that mark out the path that the sun appears to take through the year. You might think that dates in a horoscope correspond to when the sun passes through each constellation. But they don’t, much of the time, because astrology and astronomy are different systems. Plus, a closer examination of the motion of the Earth, the sun, and the stars, shows the zodiac to be more intricate than you might imagine!

The sun’s motion through the constellations

As Earth orbits the sun, the sun appears to pass in front of different constellations. Much like the moon appears in a slightly different place in the sky each night, the location of the sun relative to distant background stars drifts in an easterly direction from day to day. It’s not that the sun is actually moving. Its motion is entirely an illusion, caused by Earth’s own motion around our star.

If only it was that simple!

Why the zodiac constellations don’t always align with astrological signs

To understand why constellations no longer align with their corresponding signs, we need to know a little bit more about how the Earth moves. We also need to talk about how we measure time.

Time is a fiendishly difficult thing to define, especially if we insist on using the sun and stars as a reference. Our calendar is, for better or worse, tied to the seasons. June 21 – the approximate date of summer solstice north of the equator and the winter solstice to the south – marks the day the sun appears at its most northerly point in the sky. At the June solstice, the North Pole is most tilted towards the sun.

What makes this complicated is that the North Pole is not always pointing in the same direction relative to the background stars. Our planet spins like a top. Like a top, the Earth also wobbles! A wobbling Earth makes the North Pole trace out a circle on the celestial sphere. The wobble is quite slow; it takes 26,000 years to go around once. But, as the years go by, the effect accumulates.

Over the course of one orbit around the sun, the direction of the Earth’s axis drifts ever so slightly. This means that the place along our orbit where the solstice occurs also changes by a very small amount. The solstice actually occurs about 20 minutes earlier than one full trip in front of the background stars!

Since we tie our calendar (and astrologers tie the signs) to the solstices and equinoxes, the Earth doesn’t actually complete an entire orbit in one year. The seasonal or tropical year is actually a hair less time than one full orbit (sidereal year). This means that, each year, the sun’s location relative to the stars on any given day – June 21, for example – drifts a very tiny amount.

But wait about 2,000 years, and the sun will sit in an entirely different constellation!

The signs aligned, more or less, with their corresponding constellations when people defined the modern Western zodiac about 2,000 years ago. But in the intervening centuries, the slow wobble of the Earth’s axis has caused the solstice and equinox points to shift roughly 30 degrees westward relative to the constellations. At present, signs and constellations are about one calendar month off. In another two thousand years or so, they’ll be about two months off.

Modern constellations and the zodiac

To complicate matters more, the constellations – unlike the astrological signs – are not of equal size and shape. The stars that make up a constellation are not, for the most part, physically related. They’re just based on patterns that our ancestors saw as they gazed skyward and tried to make sense of it all.

In 1930, the International Astronomical Union formalized the constellations as regions of the sky, not just the star patterns within them. With this, they defined the boundaries we use today. These modern constellations are rooted in those the Greek astronomer Ptolemy introduced in the second century CE. He, in turn, borrowed them from ancient Babylonian texts. Different cultures have seen patterns in the sky unique to their history. Many cultures share some constellations (Orion is a notable example), but most don’t.

With the current boundaries, there are actually 13 constellations that lie along the sun’s path. The extra one not listed in any horoscope is Ophiuchus, the Serpent Bearer, which sits between Sagittarius and Scorpius. Whereas the signs remain fixed relative to the solstices and equinoxes, the solstices and equinoxes drift westward relative to the constellations or backdrop stars.

While the zodiac may not be a great predictor of love, fortune, and health, it is a great tool for better understanding the motions of the sun, the Earth, and even the cultures that have come and gone on our little planet. The zodiac signs, derived from the constellations along the sun’s path in the sky, track the orbit and wobble of Earth and remind us of astronomy’s humble roots.

Bottom line: You might associate the word zodiac with astrology, but it has an honored place in astronomy, too. The zodiac is composed of the 12 constellations that lie along the annual path of the sun across the sky.

Chris Crockett got his Ph.D. in astronomy from UCLA in 2011 and worked at Lowell Observatory and the U.S. Naval Observatory. He then realized he enjoyed talking about astronomy a lot more than actually doing it. After being awarded a Mass Media Fellowship in 2013 by the American Association for the Advancement of Science, he spent a summer writing for Scientific American, then went on to become the staff astronomy writer at Science News from 2014 – 2017. These days, he freelances, focusing on stories about astronomy, planetary science, and physics. His work has appeared in Science News, Scientific American, Smithsonian Magazine, Knowable, Sky & Telescope, and the American Physical Society”s online magazine Physics.