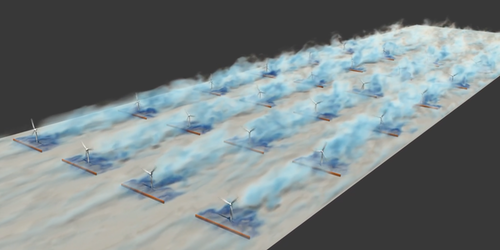 Simulations suggest that optimally placed barriers could boost wind farm performance by as much as 10%.

Cost-effective ways to produce more renewable energy are critical in the fight against climate change. New simulations suggest that windbreaks—barriers, such as walls or rows of trees—can improve the power generation of wind farms by as much as 10% [1]. Previous work suggested that windbreaks can help individual wind turbines but that they are counterproductive for very large wind farms. The new work is the first simulation of a realistic wind farm with windbreaks. The researchers involved hope that their work will lead to improved efficiency in real wind farms.

Worldwide, wind turbines currently generate 740 gigawatts of electric power—enough to power New York City 70 times over. But if fossil fuels are to be eclipsed, all renewable energy sources—including wind—will need to generate a lot more power. One way to generate more energy is to make wind farms more efficient.

Researchers have improved wind farm efficiency by staggering the locations of the turbines, to prevent each row of turbines from receiving the slowed and turbulent wake from the row directly in front. Windbreaks could potentially improve efficiency even more. Downwind of a windbreak, air below the height of the windbreak is slowed, but the air above the top is accelerated. This speedup effect is similar to a fluid going through a funnel.

Simulations from 2017 showed that a windbreak could help a single turbine by speeding up the air hitting the blades but that putting a windbreak in front of every turbine in an infinitely large wind farm would reduce the total power output [2, 3]. The simulations showed that the wind speedup only lasts for a short distance, enough to help the turbine immediately behind the windbreak. But the slowed air can propagate far downwind in a wind farm and can become increasingly harmful as multiple windbreak wakes combine. For an infinite wind farm, this cumulative wake effect cancels any benefit from speeding up the wind over each windbreak. However, no one had performed a full simulation testing the value of windbreaks for a finite, realistic wind farm.

Luoqin Liu and Richard Stevens, of the University of Twente in the Netherlands, simulated a six-row-deep wind farm with an identical windbreak in front of each turbine. They varied parameters such as the height and width of the windbreak and the distance between it and the turbine.

They found that the ideal windbreak was roughly 10% of the turbine height and about 5 times as wide as it was tall. Shorter windbreaks had little effect, and taller ones generated too large a region of slow-moving air in their wake. At this optimal height, with just six rows of turbines, the slow wake did not accumulate enough to cancel the windbreaks’ benefits.

For a 100-meter-tall turbine in a wind farm, the ideal windbreak would be 10 meters tall and 50 meters wide, according to the results. “The simplest thing you can do is just plant a lot of trees,” says Liu. Planting rows of trees for a 10% increase in wind power would be both green and extremely cost-effective, he says.

Although Liu and Stevens validated their simulation by comparing their data with preexisting field measurements of airflow over windbreaks, many questions remain. Their simulation did not include factors such as staggered wind farm layouts, changes in wind direction, or the effects of the rotating turbine blades on turbine wakes. “We don’t know whether we can really get this 10% when we build a real windbreak.” says Liu. “This is a new idea. Nobody’s tried it yet.”

The new result has other scientists thinking about practical implications. Azadeh Jafari, a fluid dynamics researcher at the University of Adelaide in Australia points to the fact that much of the improvement to power generation comes from the first row of turbines. “Maybe we can come up with a strategy of using the [windbreaks] only in the first row instead of the whole field,” she says.

“10% is a really big deal,” says Leonardo Chamorro, who studies wind farm mechanics at the University of Illinois, Urbana-Champaign. “Everybody’s surprised in the sense that wind turbines look like relatively old technology,” he says. “We know a lot, but there is a lot of work to do.”

Dan Garisto is a freelance science writer based in New York.